The measures were agreed during a Port Stakeholders’ Workshop that took place between 23rd–25th October, hosted by The Ministry of Tourism and Wildlife of the Republic of Kenya, in partnership with TRAFFIC, the United Nations Development Programme (UNDP), the United Nations Office on Drugs and Crime (UNODC), and the World Wide Fund for Nature-Kenya (WWF-Kenya). A wide range of stakeholders from 31 organisations participated in the workshop, including representatives from the Kenya Government, private sector entities, enforcement agencies, non-governmental organisations and intergovernmental organisations.

Illegal wildlife trade must be made unprofitable and extremely uncomfortable. We must join hands to help each other so that we stay a step ahead of the criminals.

Hon. Najib Balala, Cabinet Secretary, Ministry of Tourism and Wildlife of the Republic of Kenya

The port of Mombasa is the largest seaport in Africa and is a key exit point for trafficking of African wildlife. One of the most publicised seizures at Mombasa port involved two containers declared as tea leaves that were intercepted with more than three tonnes of ivory, four rhino horns, and teeth from leopards and cheetahs. Alongside elephant, rhino, and big cat parts, other wildlife and wildlife products commonly smuggled through Kenya’s seaports include pangolins, timber and shark fins.

Drew McVey – East Africa Wildlife Crime Technical Advisor for WWF-Kenya, said: “It is not enough to stop poaching in our country if we are on a transit route for the rest of Africa. To do this takes co-operation between various government agencies, the private sector and other stakeholders.” 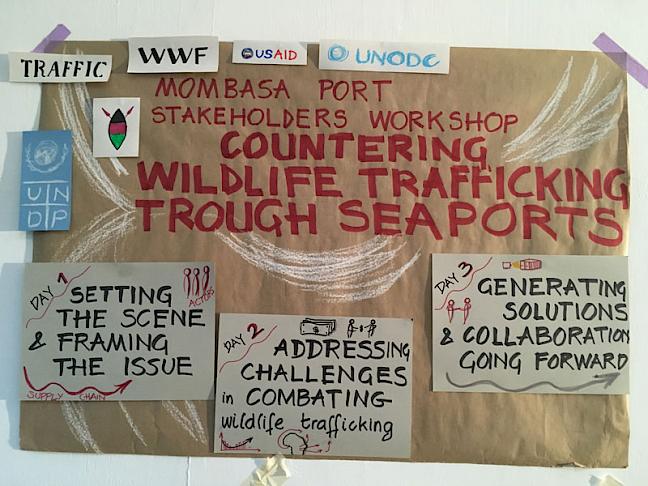 Walid Badawi, UNDP Resident Representative for Kenya, further emphasised that: “Co-operation between countries, agencies and sectors is critical in combating wildlife trafficking—a crime that threatens achievement of the sustainable development goals. Progressing from sector dialogues through to implementation of tangible actions, such as enhanced surveillance and inter-agency co-ordination, is required to stem wildlife trafficking through ports, including Mombasa.”

Stakeholders agreed that it will take close information exchange and strategic collective action to end wildlife crime and the illicit trade of endangered species worldwide.

Julie Thomson – Director East Africa Office, TRAFFIC, highlighted that: “Wildlife trafficking is a transport-intensive crime that robs countries like Kenya of their natural resources and heritage. Through collaboration and collective goal-setting, stakeholders at the seaport of Mombasa have set forth a strategy for strengthening Kenya’s shipping supply networks against illegal wildlife trade. This marks a pivotal win for Africa’s wildlife.”

Sentiments were echoed by Javier Montano Duran - Regional Coordinator Container Control Programme (CCP) Eastern Africa, UNODC: “Illicit trafficking of fauna and flora is a serious and transnational organised crime. Inter-agency co-operation is key in fighting these crimes. I am pleased to see the positive exchanges between the port stakeholders participating at this workshop, sharing best practices and collectively identifying practical measures to better face this threat.”

Detailing the impact of illicit trade on business, the Vice National Chair of the Kenya International Freight and Warehousing Association (KIFWA), Levi Kinoti said: “Wildlife trafficking is a crime of unimaginable proportions, a thorny issue which continuously impacts the logistics sector negatively. The more we collaborate to fight against wildlife trafficking the more we seal the loopholes used by perpetrators of this heinous acts. KIFWA commits to join hands with all stakeholders to end this crime.”

The workshop was generously supported by funds from the GEF and USAID.