Quito, Ecuador, June 2015—TRAFFIC has assisted with the strategic training of 300 navy, army and air force personnel to increase the impact of the country’s military in fighting timber, fisheries and other wildlife-related crime. 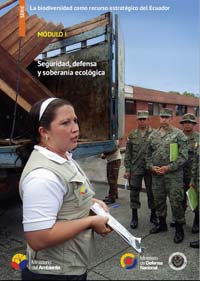 An intensive three-day course was implemented at six priority military bases where those taking part gained an understanding of the dependency of social and economic systems on ecological systems, the seriousness of wildlife crime and its impacts and methods to improve enforcement strategies. They also gained hands-on experience of dealing with wildlife crime and learned how military roles can support other environmental authorities.

The National Intelligence Secretariat linked military intelligence personnel with the Ministry of the Environment to enhance their efforts to curb illegal timber operations in Ecuador’s key biodiversity hotspots.

Plans were also drawn up during the training, aimed at increasing the impact of actions at the local and provincial levels, while an emergency phone line was established to facilitate co-ordination between staff in both Ministries taking part.

A significant output has been the mainstreaming of wildlife crime issues into daily military operations. Another outcome is an on-line course developed by TRAFFIC for high-level military staff.

The three modules (1, 2 & 3) include specialized content on Environmental Security, Biodiversity as an element of National Security priorities, and Environmental Law and military competencies.

It was launched earlier this month by the Ecuadorian Minister for the Environment and will be implemented by the Armed Forces University – ESPE through their 30 specially trained course tutors.

“It has been a huge privilege and responsibility for TRAFFIC to be entrusted by two major Ministries to help facilitate this strategic initiative against wildlife crime,” said Bernardo Ortiz, TRAFFIC's Regional Director for South America.

“Inter-Ministerial collaboration is vital to ensure a vision with clear roles and responsibilities for implementing agreed joint action plans to address wildlife crime.

Flying Under the Radar