A new study from the Wildlife Conservation Society and TRAFFIC underlines Singapore's role as a leading transit hub for birds from Africa and Europe to East Asia and the Middle East, and highlights serious discrepancies in the way this trade has been recorded over a decade. 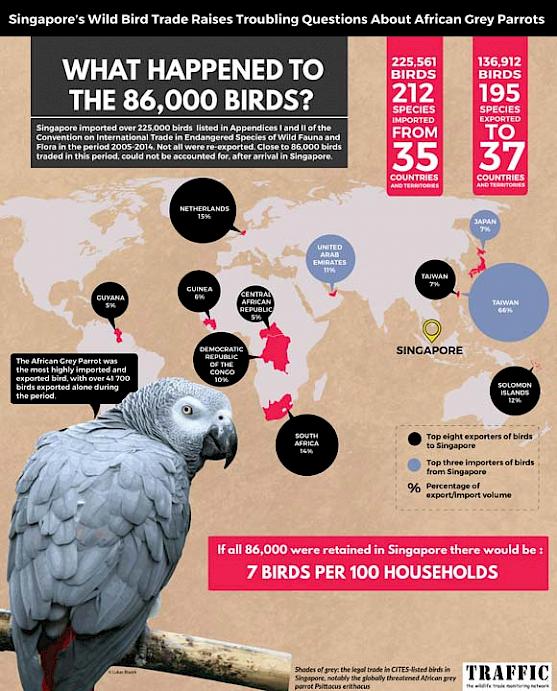 Published in Oryx, the study is the first of its kind that describes Singapore’s prominent involvement in the trade in birds listed in CITES Appendix I and II based on government data.  Notably, it also emphasizes trade record discrepancies.

The study found Singapore to have imported specimens from 212 bird species listed in Appendices I and II of the Convention on International Trade in Endangered Species of Wild Fauna and Flora (CITES) from 2005 to 2014.

More than 86,000 birds traded over this period could not be accounted for after arrival in Singapore. “Birds that were not re-exported can be presumed to have remained in the country for the domestic markets, but given the scale of the discrepancy, it seems unlikely,” said Chris Shepherd, Regional Director for TRAFFIC in Southeast Asia.

Of all species, the African Grey Parrot Psittacus erithacus, a popular pet bird, topped the list of species imported to and exported from Singapore during the assessed period—more than 41,700 traded birds were recorded.

Included as Vulnerable on the IUCN Red List of Threatened Species, the once highly-abundant African Grey Parrot is at great risk from hunting for the global pet trade and has already been eliminated in parts of its native range in Central and West Africa. In response to this growing threat to the species, a number of African countries led by Gabon are supporting the uplisting of the African Grey Parrot from CITES Appendix II to Appendix I, the strictest category, later this year when the CITES member governments meet in South Africa.

“Such significant trade data discrepancies in government figures as unearthed in this study warrant further investigation, as an inability to effectively monitor the movement of species such as the African Grey Parrot fundamentally undermines CITES and facilitates potential loopholes for illegal trade,” said Colin Poole, Regional Director for WCS.

The authors state that Singapore is well positioned to serve as a global leader, employing best practices in the regulation, compliance and monitoring of the international trade in wildlife. This is particularly important, not only in terms of its obligations under CITES, but also in relation to the potentially serious impacts that could arise from zoonotic diseases, such as highly pathogenic avian influenza viruses, being brought into Singapore inadvertently through an inadequately regulated wildlife trade.

The study calls for Singapore to begin by taking greater steps to fulfil its obligations to internationally agreed CITES guidelines and provide more complete and accurate trade information, including clearly reporting the actual number of animals in trade rather than simply the number of permits issued. In 2012, Singapore was put in the spotlight by an earlier TRAFFIC study for allowing imports of tens of thousands of parrots, mostly falsely declared as captive-bred from the Solomon Islands but in fact laundered from the wild.

The study was partly funded by WWF-Singapore.

Eastward bound: Analysis of CITES-listed flora and fauna exports from Africa to East and Southeast Asia

Species in Bushmeat Trade In Cameroon and The Republic of Congo