New Delhi: India's orchids are under pressure from illicit harvesting and exploitation for illegal trade. Of the vast diversity of 1,256 orchid species recorded in India, 307 are endemic to the country, and only 11 species are protected under the Wildlife (Protection) Act, 1972. 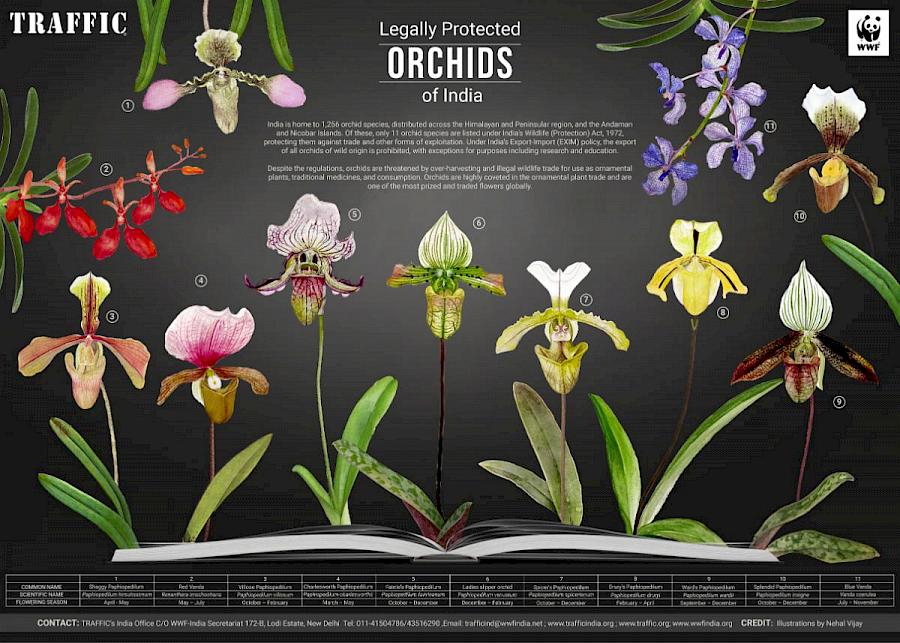 The poster was released today, ahead of Save the Himalayas Day1, since India's Himalayan region is home to many orchid species, with the Eastern Himalayas having the greatest orchid diversity in India.

The new poster, "Legally Protected Orchids of India" combines beautiful illustrations of orchid flowers with related information and will aid enforcement agencies in identifying the orchid species in the illegal trade. The poster will also help to create awareness about orchids among students, educators and the general public.

Such vast orchid diversity, unsustainable harvesting practices and illegal trade, coupled with limited protection measures and lack of awareness makes the future of orchids a serious concern. By issuing this identification poster, our joint efforts to stop the illegal orchid trade gets a strong and considered boost."

In India, orchids are illegally collected from the wild and traded as ornamental plants, used in traditional medicine and also consumed as food. The rising demand for orchids for various purposes leads to unsustainable harvesting practices. Globally this second-largest family of flowering plants have some of the most prized and traded flowers. In India, protected species of orchids such as Blue Vanda Vanda coerulea and Lady's Slipper have been found in wildlife seizures.

On the International Day for Biological Diversity in May this year, TRAFFIC and WWF-India also released a factsheet titled "Orchids: Factsheet on India's orchids in illegal wildlife trade". The factsheet was a compilation of beautiful images and well-researched content on general information and facts about orchids, their legal status and threats.

Both the factsheet "Orchids: Factsheet on India's orchids in illegal wildlife trade" and the poster "Legally Protected Orchids of India", by TRAFFIC and WWF-India are efforts to bring conservation and protection issues related to orchids to the forefront. Both of these are freely available for use and sharing.