IUCN Congress kicks off in Korea 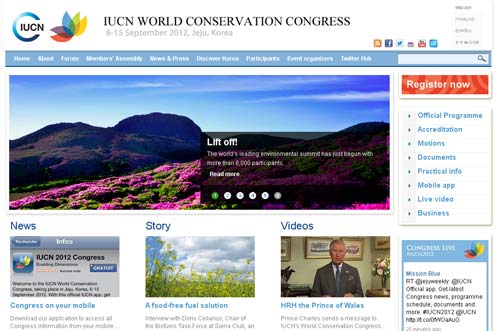 More than 8,000 people from more than 170 countries are in Jeju to discuss, debate and vote on solutions to some of the globe’s most pressing environmental and development issues.

A TRAFFIC delegation is attending the event. IUCN is one of the joint programme partners of TRAFFIC, along with WWF.

Held every four years, the Congress, which runs to 15th September, brings together government and non-governmental organizations, scientists, business and community leaders from around the world to look at how nature provides the solution to many of our problems.

“Nature is inherently strong, but we must improve how quickly nature and people adapt to change,” says Julia Marton-Lefèvre, Director-General of IUCN.

“If we strengthen nature, we’ll see that ecosystems are more resilient and people, communities and economies are healthier.”

A huge range of issues is on the agenda, including the latest news from the IUCN Red List of Threatened Species™, growing threats to tuna populations, fresh figures on coral reef destruction and the urgent need to stop countries making false claims on ocean protection.

While conservation is focused on global issues, various local issues will also be in the spotlight. Korean and German experts will be debating how to use the Demilitarized Zone between North and South Korea, and its surprisingly intact nature, to promote peace, referencing experiences from the former iron curtain. Across the border, replanting and rehabilitating the destroyed forests of North Korea will also be addressed.