Beijing, China, 5th June 2021 - On World Environment Day, video game company Huya announces it is joining the Coalition to End Wildlife Trafficking Online (hereafter referred to as the "Coalition"). Huya hopes to crackdown on the spread of harmful content related to wildlife through technical means and effective platform content checking.

To enhance the risk control ability on the platform, Huya held a special training in collaboration with TRAFFIC, to raise their employees’ awareness of illegal wildlife trade. Experts trained more than 1000 people on Huya’s security team on Wild Animal Protection Laws and the identification of commonly traded wild animal products.

We are delighted to join the Coalition on the special occasion of World Environment Day. We will work with our industry partners to fight the illegal trade of wildlife online and protect nature. In the future, we will continue to regulate the daily stream content of anchors through the platform, actively disseminate  wildlife protection messages to our anchors and viewers, and popularize relevant knowledge, contributing to the protection of the earth environment."

Huya, which offers live streaming to its users, intends to clamp down on illegal wildlife trade by using image and voice recognition to flag issues in real-time and remove them from its platform. Huya also intends to further develop AI identification models for wildlife based on the rich wildlife sample database of the Coalition and improve the accuracy of wildlife identification. In addition, Huya will support law enforcement authorities to combat offline illegal hunting and trading of wild animals and plants.

In response to the growing demand for live-streamed information, in April 2020, Huya and the Chinese Sturgeon Research Institute held a live stream where more than one million viewers witnessed the moment when the Chinese sturgeon returned to the Yangtze River. Due to its success, Huya plans to launch more popular science programs related to wildlife protection. 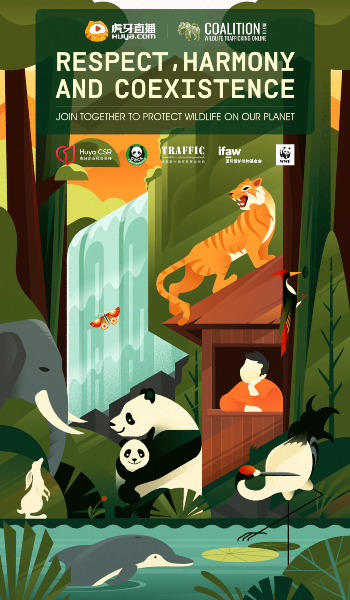 About the Coalition to End Wildlife Trafficking Online

The Coalition to End Wildlife Trafficking Online launched in 2018 and is jointly convened by WWF, TRAFFIC and IFAW. Now comprising 41 tech company members, this collaboration aims to unite the tech industry to standardize prohibited wildlife policies, train staff to better detect illicit wildlife products, enhance automated detection filters, and educate and empower users to report suspicious listings. At the core of this effort is sharing learning and best practices across company platforms to avoid duplication and prevent wildlife traffickers from shifting activities from one platform to the next.

Taiwan announces move to close its domestic ivory market by 2020