The Plight of the Pangolin – the world’s most trafficked mammal

On the eve of World Pangolin Day 2022, TRAFFIC, a Cambridge Conservation Initiative partner, shares a new video of Sir David Attenborough to raise awareness of the plight of the pangolin – the world’s most trafficked mammal.

Roasted pangolin scales have historically featured in some traditional medicine treatments for detoxification, to drain pus, relieve palsy, and stimulate lactation. More recently pangolins have also been consumed for their meat, skins, scales and claws, and demand is now decimating pangolin populations worldwide.

New data from TRAFFIC  confirms that at least 23.5 tonnes of pangolins and their parts were trafficked in 2021 alone. All eight species of pangolin are listed on the IUCN’s red list of threatened species and prohibited from international commercial trade under the Convention on International Trade in Endangered Species of Wild Fauna and Flora (CITES).

Pangolins are very important in the whole ecosystem that we have... If you lose pangolins you upset all sorts of things but the sheer humanity of not looking after such a beautiful gentle animal as a pangolin breaks my heart.

TRAFFIC is taking action across the pangolin supply chain to reduce the threat:

Renewed efforts must be made to reduce consumer demand for pangolin products if we are to protect these shy, elusive animals, so vital to Asian and African ecosystems, from disappearing. ” 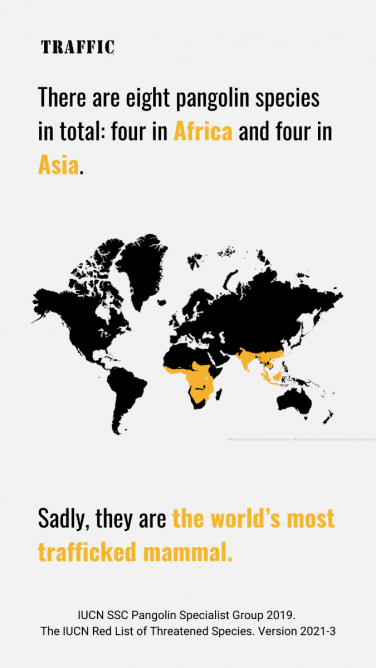 "Beyond reducing consumer demand however, international and national legal frameworks need to be strengthened and law enforcement needs to be increasingly robust and supported if, collectively, we are to conserve the future of pangolins," said Richard Scobey.

TRAFFIC’s efforts to reduce demand for pangolin products include those through USAID supported ‘Saving Threatened Wildlife’ activities with the Traditional Medicine community and government leaders in Viet Nam, and through the ‘Kind Dining’ campaign in Thailand.

African countries are often implicated as the origin, predominantly of scales, heading to Asia. However, TRAFFIC is also tracking the domestic trade of these protected species’ as source sustenance within Africa. This species has been found for sale in TRAFFIC’s recent Bushmeat Trade studies in Tanzania and Cameroon and The Republic of Congo.

The need for increased global action

In recent years, there has been a heightened yet unproved association of pangolins with zoonotic disease that has prompted some promising action:

“It’s welcoming to see that Asian countries have improved the protection of pangolins, including levelling up to national first-class protected animals and restricting the use of pangolin scales in traditional medicine. However, TRAFFIC calls on the Asian governments to further strengthen the inventory management of pangolin scale, increase the transparency of stockpiled raw material consumption, and ensure that illegally sourced scales will not be laundered,” said TP Singh, Asia/Pacific Programme Director.

About the Cambridge Conservation Initiative

State of Wildlife Trade in China 2008