Tokyo, Japan, 27th August 2013—Last week in Tokyo a symposium was held to celebrate 40 years of the Convention on International Trade in Endangered Species of Wild Fauna and Flora (CITES) and to discuss issues confronting the responsible utilization of sharks. 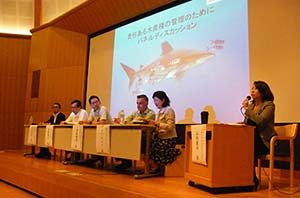 The event, hosted by TRAFFIC, was opened by Mr Tomokatsu Kitagawa, an elected member of Japan’s House of Representatives and also the Director of the Environment Division of the Liberal Democratic Party of Japan, and Dr Atsushi Suginaka from the Ministry of Foreign Affairs.

The Keynote speech was given by Mr John Scanlon, the Secretary-General of CITES, who presented a detailed explanation of how the Convention works to an audience of around 200. His presentation was followed by speakers from a diverse range of backgrounds, including government, research, conservation and commercial fishing organizations.

The significant interest in the event underscored progress both in re-igniting domestic public awareness in Japan about the issues surrounding unsustainable wildlife trade and also in stimulating dialogue among a range of stakeholders. More than half the symposium was dedicated to fisheries matters, which have historically been a source of policy challenges in Japan.

Opening statement
In his keynote speech, the CITES Secretary-General, John Scanlon showcased historical achievements of CITES and Japan’s contribution as a long-standing supporter of the Convention since it joined in 1980. He then introduced critical advancements made at the latest Conference of the Parties in Bangkok, Thailand, earlier this year. This included the listing of numerous timber species and the listing of all manta rays and several shark species, noting Japan’s significant interest, and expertise, in marine species. While Japan entered a reservation for the shark species it has offered to provide technical support with implementation. Lastly the decisions on actions to address urgently the crises facing elephants and rhinos were introduced.

Mr Scanlon welcomed Japan’s new initiative, earlier mentioned by Dr Suginaka from the Ministry of Foreign Affairs, to provide assistance to new member Parties to CITES. Regarding shark listings, Mr Scanlon said: “Japan, both through its Ministries and through its private sector, has deep experience and knowledge with respect to fisheries, and we are very keen to work with relevant agencies, including fisheries, and if possible with the private and non-governmental sectors in assisting with the implementation of these decisions.”

“Japan could take a very active role in helping countries address wildlife trafficking, for example, through providing insights from our experience in successfully reducing domestic demand for ivory and rhino horn in recent decades,” she said. “It is also hoped that Japan could provide financial and technical assistance to developing nations to help with capacity-building and other issues.”

At the national level, recent trends in Japan’s border controls of CITES-listed items and a summary of the country’s legislation governing domestic trade were presented by Japan’s CITES Management Authority (the Ministry of Economy, Trade and Industry) and one of Japan’s CITES Scientific Authorities (the Ministry of the Environment), respectively. The latter noted the recent legislative amendments to strengthen penalties and regulation under Japan’s national regulations.

Fisheries
The series of diverse presentations was followed by a vibrant panel discussion on “responsible shark management”. At the international level, Glenn Sant, TRAFFIC’s Fisheries Trade Programme Leader and Japan’s Fisheries Agency both spoke about the measures needed for effective shark management, including the importance of practical implementation of CITES trade controls. (Sant's presentation PDF in English and Japanese).

Views from the grassroots level were presented by the representative of Kesennuma Pelagic Fisheries Cooperative Association. Kesennuma, a major Japanese port of landing for sharks, was devastated by the 2011 tsunami/earthquake disaster. As part of its rebuilding of fishing and fish-processing industries, Kesennuma is focusing on the traceability and sustainability of its shark fisheries. The representative voiced his deep regret over the unfavourable image that had been painted of Kesennuma’s shark industry by some overseas media and stressed the industry’s ongoing efforts toward recognition as a sustainable fishery. His view was echoed by a researcher from the Centre for Sustainability Science at Hokkaido University.

A particularly significant outcome of the event was a common understanding that, despite some differences in views and priorities, achieving sustainable shark fisheries is a shared long-term goal at the international, national and local levels in Japan. All stakeholders need to work together to achieve this, for example through the development of adequate traceability systems to enable responsible fisheries management and trade. The symposium closed with a general spirit of collaboration to explore how these outcomes can be achieved.