Symposium highlights threats to the world’s plants, but solutions are to hand

London, UK, 12th May 2016—TRAFFIC was among the participants at a State of the World’s Plants Symposium convened by the Royal Botanic Gardens, Kew in London this week to mark the launch of a ground-breaking study into plants worldwide. 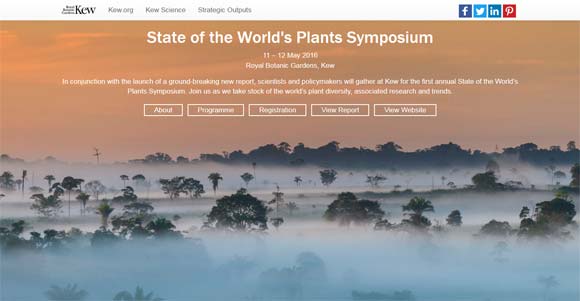 Plants underpin every ecosystem and are ultimately the food source for every animal on earth, yet they remain relatively little known. However, the latest study, State of the World’s Plants launched at the Symposium, found that an estimated one in five of the world’s plant species is at risk of extinction, while approximately 2,000 plant species are still being discovered each year.

Overharvesting of wild plants, logging and agricultural land conversion were identified as the top three threats to vascular plant species assessed in the study. Plants used medicinally appear to be particularly at risk: although the global conservation status of only a fraction has been evaluated, almost half were considered threatened.

Of the currently 390,000 species of known plants, the IUCN Medicinal Plant Specialist Group estimates 60,000 are used for medicinal purposes globally, with the use of around half of them documented in traditional systems and national pharmacopoeias. Often wild plants are the key primary source of healthcare for indigenous peoples and local communities, while their collection, processing and sale supports the livelihoods of millions.

Wild plants are also an essential source of ingredients for billion dollar industries producing pharmaceuticals, cosmetics and foods, with an estimated 4,000-6,000 species being traded internationally in significant quantities, the majority of them wild-harvested.

However, growing market demand is leading to increased harvesting pressure, with companies often promoting the “natural” and “wild” properties of the ingredients, but directly little attention towards whether their sourcing is ecologically and socially sustainable.

Fortunately, help is at hand via the FairWild Standard. TRAFFIC’s Programme Leader – Medicinal Plants, Anastasiya Timoshyna, presented information at the Symposium on the FairWild Standard, the best practice guidelines for sustainable harvest and equitable trade in wild plants, fungi and lichen. The Standard was developed to play an important role in managing the sustainability of resource harvest and trade through voluntary compliance mechanisms, as well as supporting implementation of existing international agreements, regulations and laws. Use of the FairWild Standard is highlighted on the Why Go Wild toolkit that TRAFFIC developed to raise awareness of wild plant harvesting issues.

“In essence the FairWild Standard provides a blueprint for ensuring plants species and the people whose livelihoods and well-being depend upon them are around for generations to come,” said Timoshyna.

The FairWild Standard is increasingly being adopted into the wild-plant supply chain by industry through the implementation of the FairWild certification scheme. In 2014, around 300 tonnes of certified ingredients, derived from 24 species of wild plants whose collection practices and supply had met the FairWild Standard, were used by food, health products and cosmetic manufacturers. Over 20 companies are involved in FairWild certified value chains, and products are now sold in the USA, the European Union, Japan and other counties, labelled as “FairWild”.

Beyond certification, other companies are using the FairWild Standard as a basis for responsible sourcing of wild plants through their internal policies and sourcing practices, including some key traditional Chinese medicine (TCM) manufacturers, who are beginning to employ FairWild principles as part of their corporate social responsibility commitments. Furthermore, there are projects aiming to improve the livelihoods of low-income households and verify sustainable management and harvesting practices, like that supported by the Darwin Initiative in Bac Kan province, Viet Nam.

Meanwhile reference to the FairWild Standard has been made within national conservation strategies in a number of countries/territories, including Japan, Hong Kong and Mexico, while it has been recognized as a best-practice tool to support the delivery of the Global Strategy for Plant Conservation  and for the assistance it can provide in the delivery of commitments under international Conventions such as CITES and the CBD.

“The State of the World’s Plants report has highlighted the importance of wild plants and the multiple threats they face, but thanks to the FairWild Standard, a viable solution to the over-harvesting of wild plant species is to hand,” said Timoshyna.

“However, we need more companies to become engaged with FairWild and there needs to be greater consumer awareness and demand for responsibly sourced ingredients, which in turn will encourage companies to demonstrate traceability, sustainability and equity in their sourcing practices.”

The increasing demand for wild plants—as ingredients for food, cosmetics, well-being and medicinal products—poses major ecological and social challenges. The pressure on potentially vulnerable plant species can endanger local ecosystems and the livelihoods of collectors, who often belong to the poorest social groups in the countries of origin.

As a response to these concerns, the FairWild Foundation is working with partners worldwide to improve the conservation, management and sustainable use of wild plants in trade, as well as the livelihoods of rural harvesters involved in wild collection. TRAFFIC has supported the development of the FairWild Standard, and now hosts the organization’s Secretariat under a partnership agreement.