South Africa, 22nd January 2015—Official figures released today by South Africa confirmed that 2014 was the worst on record for rhino poaching. A total of 1,215 rhinos were poached in South Africa in 2014, an average of more than three animals per day or 100 per month.

The latest figures illustrate the severity of the rhino poaching crisis with losses substantially increasing for seven consecutive years. The number of animals killed now raises concerns that rhino populations in South Africa may be in decline for the first time in nearly 100 years.

Increased support—both in terms of more rangers on the ground and more up-to-date equipment have been made available during the year—yet despite these measures the situation continues to deteriorate.

Around the world, a number of bold statements have been made during the past year by senior government figures, pledging resources and action to address the global poaching crisis.

However, South Africa—the epicentre of today's rhino wars—was conspicuous by its absence from joining the “London Declaration”, an international pledge made in February 2014 by the majority of countries directly impacted by the global poaching crisis to take action to address the situation.

“The lack of strong political will and active leadership from all arms of the government, neighbouring Mozambique and key Asian countries remains a serious impediment to turning this crisis situation around,” said David Newton, Director of TRAFFIC in East and Southern Africa.

In March this year, a follow-up meeting takes place in Kasane, Botswana, to review progress made against the London Declaration’s pledges and would provide South Africa with an opportunity to demonstrate similar commitment towards the initiative.

The reasons why rhino poaching continues to rise in South Africa are complex but seemingly include a combination of corruption, internal institutional strife and judicial delays in key prosecutions.

The South African Police Service, and specifically the “Hawks”, a key agency addressing wildlife crime in the country, has experienced increasing internal turmoil recently following the suspension of a number of senior officers. This distraction from the unit’s duty to fight organized crime inevitably means the poaching crisis is not receiving the agency’s full attention.

Kruger National Park, home to the country’s largest rhino population has been particularly severely hit: a staggering 827 rhinos were poached there in 2014. The huge 20,000 km2 park has open borders with neighbouring Mozambique, from where poaching syndicates operate with apparent impunity and little fear of arrest or prosecution from Mozambican authorities. However, that appears not to be the only factor at work: several Kruger park rangers were arrested last year in connection with poaching incidents inside the park.

Meanwhile, events elsewhere point to other problems within the system. Highly publicised arrests of rhino poaching gangs and their ringleaders have yet to come to full trial: one notorious case has been dragging on for more than four years. The alleged ringleader in the case was last month linked to a gang of 16 people arrested in the Czech Republic over their suspected involvement in international trafficking of rhino horns in the guise of sport hunted trophies from South Africa to Viet Nam.

In October 2014, US authorities announced the indictment of the same individual and his brother on multiple charges, including conspiracy, money laundering and wildlife crime and are now seeking their extradition to the US to face the charges.

2015 is a critical year for rhino populations in South Africa; overall the rhino poaching situation remains bleak, with many commendable enforcement efforts being seriously undermined by internal political conflict and international trade dynamics beyond the reach of South Africa.

“Another year of poaching like 2014 and it becomes increasingly difficult to see a positive conservation future for South African rhinos,” said Tom Milliken, TRAFFIC’s Elephant and Rhino Programme Leader.

“We're facing a ‘do or die’ situation right now.” 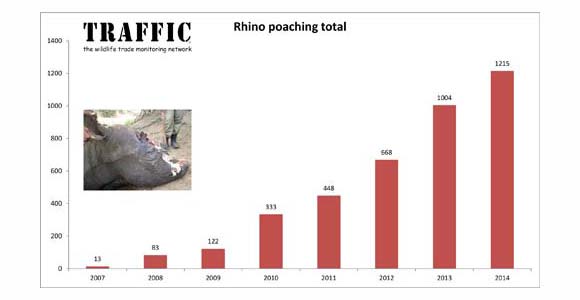