The report, “An assessment of South African dried abalone Haliotis midae consumption and trade in Hong Kong,” produced by TRAFFIC as part of the USAID-funded Wildlife TRAPS Project, shows that South African abalone imports to Hong Kong have increased in recent years, despite severe restrictions on wild harvest. It estimates that of South African abalone imports to Hong Kong in 2015, 65% was illegally sourced and trafficked compared to the 35% that was legally wild-caught or produced through aquaculture operations.

"Abalone is one of the most prized items in Cantonese cuisine—a must-have on celebratory banquet menus,” said TRAFFIC’s Wilson Lau, author of the assessment. “Right now, in preparation for the upcoming Chinese New Year, thousands of people are buying abalone in Hong Kong. Unfortunately, if it’s dried abalone from South Africa, it may have been poached and trafficked, meaning consumers run the risk of unwittingly surpporting organized crime.” 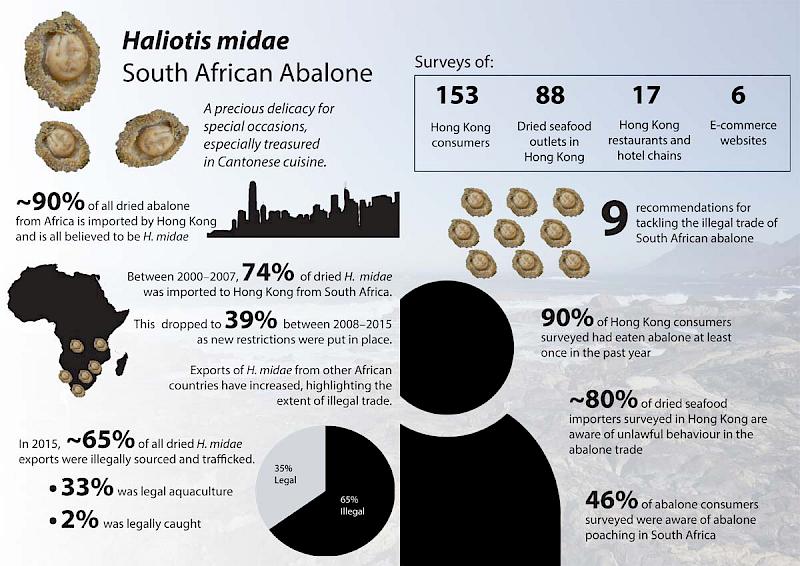 In the past decade, efforts to protect the legal abalone fishery have been undermined by international underground criminal networks. After South Africa took a number of regulatory measures in 2007 and 2008 to protect crashing abalone populations, the new report reveals that illicit trade routes shifted. Instead of mainly exporting poached abalone directly to Hong Kong, traffickers increasingly smuggled abalone to nearby African countries, such as Mozambique and Zimbabwe, before re-exporting the product. Between 2008–2015, 61% of South African abalone exports to Hong Kong came from African countries outside South Africa, a significant increase from the 36% that was exported from outside South Africa between 2000–2007. Aside from one small farm in Namibia, no other African country legally exports the marine mollusk.

This highly profitable trade is managed by organised criminal syndicates that reach sellers and buyers in Hong Kong who may or may not realise their involvement is bankrolling illegal activities. Once poached abalone arrives in Hong Kong, under the current legislation, it can be openly traded and sold in markets alongside legally sourced abalone.

South African abalone is not protected in Hong Kong law, meaning that there is no course of legal or enforcement action available to block the sale of poached abalone once the product reaches the market. This could be easily resolved with a CITES listing.

The report shows that the majority of abalone traders, about 80%, are aware of some form of illegal activity surrounding South African abalone, but less than half of consumers had any knowledge of abalone poaching in South Africa.

“Conventional wisdom would suggest that the more a food item is consumed, the more the consumer would be knowledgeable about what they are eating, but such a link does not appear to exist with South African abalone in Hong Kong,” says Lau.

Current levels of abalone poaching have serious implications for the sustainability of the South African fishery, which in turn, could have rippling impacts on the market. One-third of all abalone imported by Hong Kong is of South African origin, and the report’s findings indicate that the availability of this abalone, along with its quality and reasonable price (compared to other more expensive abalone varieties), helps boost South African abalone’s popularity among consumers. Any reduction in South African abalone’s availability could affect Hong Kong buyers’ strong preference for the product—creating a strong incentive for legal producers to support measures that ensure the sustainability of supplies.

To reduce the threat of poaching and trafficking, the report offers nine recommendations for governments, legal producers, conservation groups and the donor community to take action. They include listing and enforcing regulations for dried Haliotis midae trade under CITES, working with industry to support the trade in legally sourced South African abalone, and implementing methods for strengthening law enforcement, improving traceability, and raising public awareness about the species and illegal trade. 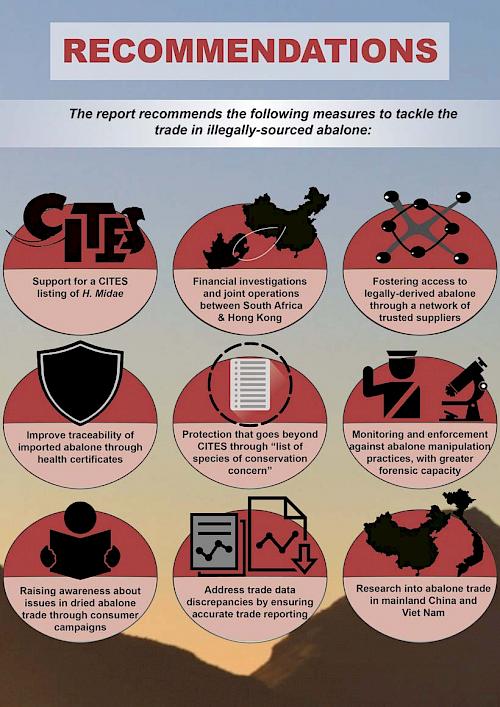 of all dried South African abalone is imported by Hong Kong

as much South African abalone poached than the amount legally harvested in 2015.

The United States Agency for International Development (USAID) is responsible for the majority of overseas development assistance from the United States Government and works to end extreme poverty and promote resilient, democratic societies while advancing security and prosperity for America and the world