New Delhi, India: Owls in India are victims of superstitious beliefs and rituals often promoted amongst the unsuspecting public by local mystic practitioners.

TRAFFIC has identified 16 species of owls that are commonly trafficked in the illegal wildlife trade in India. To raise awareness about these owl species and help with their identification, TRAFFIC and WWF-India have created an informative poster, ‘Imperilled by illegal wildlife trade: Owls of India’, which is freely available to download.

The poaching and trafficking of owls in India have become a lucrative illicit trade resting on the wings of superstition. Lack of awareness about owls in the illegal wildlife trade and the limited capacity of enforcement agencies to identify them has made this illegal activity difficult to detect or curb. We are hopeful that our new identification poster will help to bridge this enforcement gap.

Out of the approximately 250 owl species found worldwide, about 36 are found in India. All owl species in India are protected under the Wildlife (Protection) Act, 1972, making poaching, trade, or any other form of exploitation a punishable offence. They are also listed in Appendix II of CITES, thus tightly regulating their international trade. 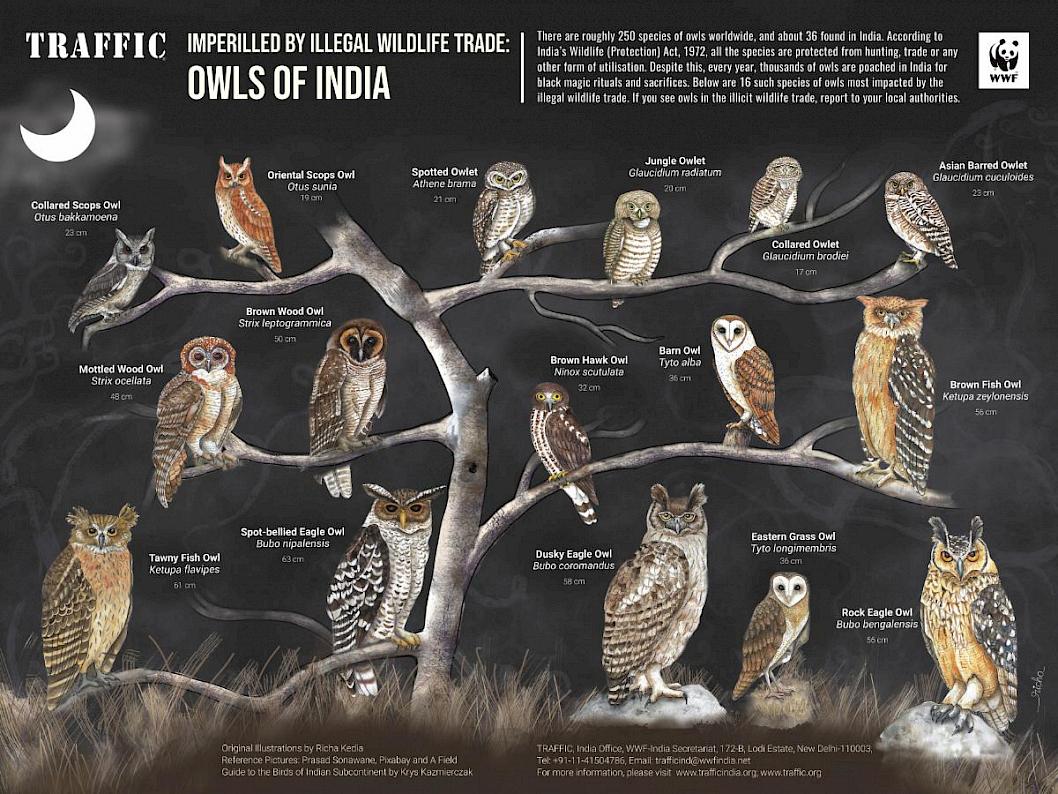 Despite the legal restrictions, every year, hundreds of birds are sacrificed for mystic rituals and practices linked with superstition, totems, and taboos across the country, and this usually peaks around the festival of Diwali. Especially in smaller towns and villages, the use of owl parts such as the skull, feathers, ear tufts, claws, heart, liver, kidney, blood, eyes, fat, beak, tears, eggshells, meat, and bones are prescribed for ceremonial pujas and rituals.

Mr Ravi Singh, Secretary-General and CEO of WWF-India, said, “Owls, as birds of prey, play a crucial role in balancing our ecosystem and as friends of farmers, keeping rodents in check. They also have a strong cultural significance and often elicit strong emotions ranging from fascination, awe, hate, to disdain. The continuing trend of these birds being exploited for illegal trade needs to be negated through concerted action. A strong citizen support, generated through public awareness can go a long way in their conservation”.

Owls keep a check on agricultural pests, reducing the dependence on pesticides. It is important to conserve and protect the species and such initiatives by TRAFFIC and WWF-India are impactful and will hopefully contribute towards curbing illicit trade of owls in the country.

2  TRAFFIC’s report on poaching and illegal wildlife trade of owls in India entitled “Imperilled Custodians of the Night”, launched in November 2010, can be viewed at https://wwfin.awsassets.panda.org/downloads/imperilled_custodians_of_the_night.pdf

Critically Endangered Hornbill gets a protection boost in Thailand.