Johannesburg, South Africa, 15th February 2019—South Africa has announced the official number of rhinos illegally killed in the country during 2018 as 769 animals: a decrease on last year’s 1028 but still more than two animals per day.

“While there is welcome evidence that anti-poaching efforts are beginning to pay off, there is still much to do—rhino populations are still very much at risk

“We can’t forget that the bottom has fallen out of the White Rhino population: the world’s largest population in Kruger National Park has demonstrated marked annual decline since 2012 even with reduced poaching in 2018”.

It is the fifth year in a row where the rhino poaching total has dropped since the record high of 1,215 losses reported in 2014 and while the authorities are to be congratulated on the gains made, to capitalise on the current momentum against poaching, South Africa needs to ensure successful conviction of those engaged in poaching operations, with suitable deterrent sentences and penalties, combined with asset forfeiture. Investigations should make full use of available technology, such as DNA forensic evidence, while efforts should be made to combat the corruption that facilitates trafficking. In November 2017, Glenn Phillips managing executive of SanParks, the government agency in charge of managing National Parks, said he was aware of collaboration between some staff members and poaching syndicates.

On 16th February, four suspects were arrested in Kruger National Park in p0ossession of a freshly cut rhino horn. They included a SANParks employee. 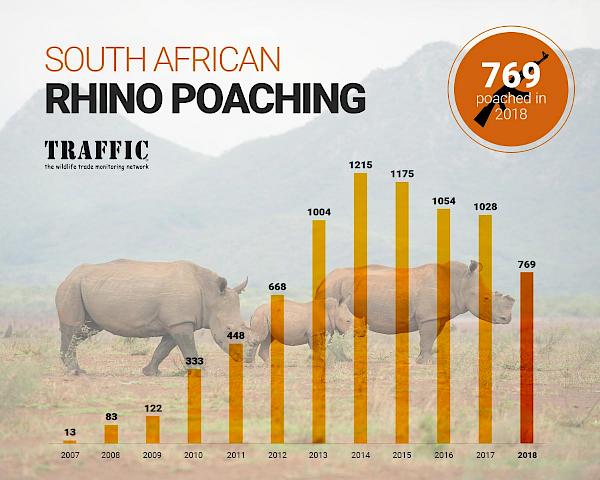 South Africa remains the country most heavily impacted by the rhino poaching crisis, which is driven by the ongoing demand for rhino horn in Asia, in particular from Viet Nam and China.

“Progress in South Africa will be undermined without appropriate action in consumer countries, including effective law enforcement and actions to reduce the demand for rhino horn that ultimately drives the trade chain,” said Milliken.

Although Viet Nam introduced a new penal code in 2018, with stricter penalties for those convicted of wildlife crimes, it is unclear to what extent these measures have been applied within the judicial system, while possession of under 50 grammes of horn is exempt from the stricter penalties under the new legislation.

Furthermore, although the rhino poaching total was down, the official government statement notes: “Regrettably, elephant poaching is also on the increase. A total of 71 elephants were poached in the Kruger National Park between 1 January and 31 December 2018.” Together with a single elephant poached in KwaZulu/Natal, that brings the national total for South Africa in 2018 to 72 animals.

The official statement continues: “Government recognises that international co-operation remains a critical component of our overall response strategy (both at a regional and international level) to halt rhino and elephant poaching, and all related wildlife crime.”

Poaching and Wildlife trafficking in the Garamba-Bili-Chinko landscape