Ongoing poaching¹, smuggling, and laundering² are endangering endemic monitor lizards in the Philippines warns a new report by TRAFFIC.

Researchers discovered more than 541 monitor lizards across 13 species listed for sale during a 30-month monitoring of 20 groups on Facebook in the Philippines. Close to 90% of these were hatchling or juvenile animals.

The Trade of Live Monitor Lizards (Varanidae) in the Philippines report found that nearly two-thirds of the lizards were from five of 11 species that occur solely in the Philippines. One of these endemic species, the Marbled Water Monitor Varanus marmoratus, was the most common and consistently available to purchase online between September 2017 and February 2020.

It is illegal to trade any wild-caught native monitors since the country’s wildlife authority has not issued permits to collect and trade native wild reptiles for commercial purposes since 2001. Although the report was unable to establish whether the lizards listed online were all wild-caught, the evidence of sellers’ posts claiming the lizards were hunted and the existence of scant registered wildlife farms, points to the potential illegal harvesting of monitor lizards from the wild.

“This research clearly shows that native and range-restricted species are being caught and sold illegally. Although some social media platforms remove posts offering wildlife, if they violate use terms, much more must be done by enforcement agencies to crack down on those catching, selling, and buying these animals,” said Emerson Sy, TRAFFIC’s lead author of the report.

Apart from illegal online trade, the study also raised concerns about the laundering of wild caught animals into legal trade, either through questionable exports or under the guise of captive breeding³ operations.

For instance, there was no legal import record for the one Komodo dragon Varanus komodoensis­ that was found for sale during the online survey. This CITES⁴ Appendix I-listed monitor lizard, endemic to Indonesia, has never been legally imported into the Philippines in the past 40 years. This means it is highly likely that this Komodo dragon individual has been trafficked into the country illegally. 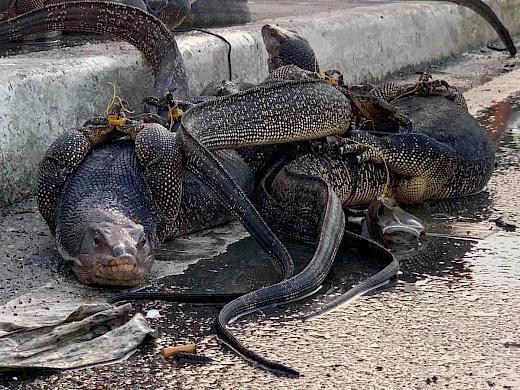 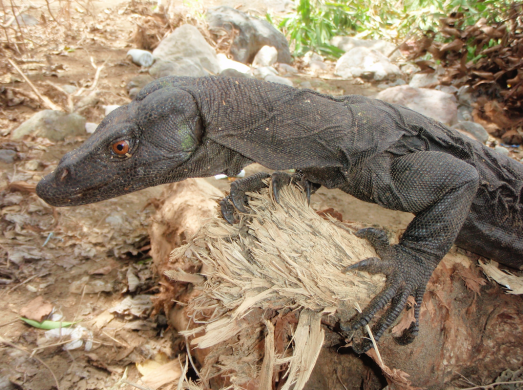 Some of the 40 Green Tree Monitor Lizards Varanus prasinus offered for sale online were also likely smuggled considering there are only records of seven individuals being legally imported into the Philippines in previous years.

There is emerging evidence – globally and in the Philippines – that shows that some wildlife captive breeding facilities are involved in wildlife laundering. TRAFFIC urged greater scrutiny of these facilities; pointing out that a legalization exercise in 2004 in conjunction with the implementation of a new law created a pool of legal wildlife in the country of uncertain origin.They argued that regis­tered wildlife farms that benefitted from the process could use the animals legalised at that point as a cover to fraudulently declare poached or smuggled wildlife as captive-bred.

If facilities that claim to breed reptiles in captivity don't undergo thorough checks, the unscrupulous will continue to sneak wild animals into trade under the guise of legal captive breeding. Better checks and balances will also ensure that facilities falsely claiming to conduct breeding for conservation do not gain access to wild-caught animals - added Sy.

Authors also linked the Philippines to international monitor lizard smuggling as novel and unusual pets, particularly to the US and Europe. In the Philippines, the lizard is also in demand as a snack during liquor drinking sessions.

“There must be greater vigilance at the provincial level to prevent the illegal harvesting of local monitor lizards, and for enhanced vigilance at seaports and airports”, said Sy.

Facebook is a member of the Coalition to End Wildlife Trafficking Online and is working with TRAFFIC and others through a multifaceted approach to address this issue.

1.Poaching – the illegal trapping and capture of wildlife.

2.Wildlife laundering – the process of fraudulently declaring illegal or wild caught animals as bred in captivity.

3.Captive breeding – the process of maintaining and breeding legal wildlife parental stock in a wildlife facility.

4.CITES: Convention on International Trade in Endangered Species of Wild Fauna and Flora.

Assessing The Trade In Pig-Nosed Turtles in Papua, Indonesia