Kuala Lumpur, Malaysia, 24th April 2014—Taxi drivers are revving up the effort to stop wildlife crime in Malaysia by featuring specially designed car stickers that call on passengers to report cases of suspicious trade in wild animals and plants to a hotline. 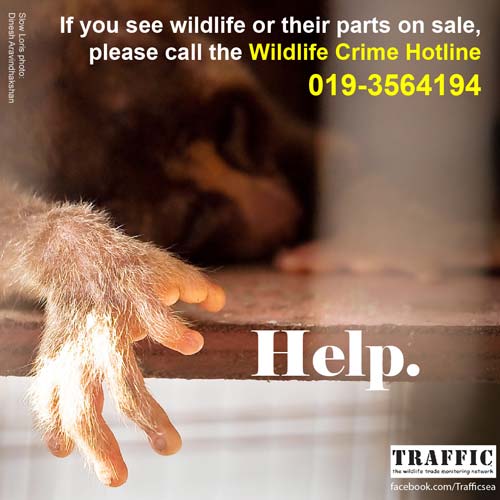 Designed by TRAFFIC, some 500 car stickers will be distributed to drivers by MyTeksi, the largest automated smartphone taxi booking platform that is available in Malaysia, Singapore, Thailand, Viet Nam and The Philippines. More than 20,000 taxi drivers in the region are registered with the network and the MyTeksi booking app has been downloaded onto more than one million mobile devices.

The stickers feature the Wildlife Crime Hotline number—a 24-hour call line for the public to report illegal activities involving wildlife throughout Malaysia, such as live animals or their parts and products in trade.

Malaysia is home to a long list of species threatened by illegal wildlife trade and is also a hub for trade in species from other parts of the world, from nearby Indonesia, to as far away as Africa and South America.

The hotline is managed by the Malaysian Conservation Alliance for Tigers (MYCAT)* of which TRAFFIC is a partner. Information received from the public via the hotline is channeled to the Department of Wildlife and National Parks Peninsular Malaysia or other enforcement authorities.

The reports made to the hotline in 2013 ranged from illegal pet trade or ownership to illegal logging and poaching signs in the forest. They resulted in several arrests in connection with keeping protected wildlife and offering wild meat for sale. Reports from the public have also resulted in confiscation of wildlife kept without permits, the removal of snares and the recovery of smuggled timber.

“Everyone has a role to play in cracking down on the illegal wildlife trade” said Chris R. Shepherd, TRAFFIC’s Regional Director in South-East Asia.

“The participation of the public is absolutely essential.  After all, it is our wildlife, our heritage, and our future that the criminals involved in the illegal wildlife trade are stealing and profiting from.”

“Slapping a car sticker on a window may be a simple act but by supporting us in this way, MyTeksi members will help carry the message and the hotline number further.”

The sticker also features a photograph of a Slow Loris taken by Malaysian photographer Dinesh Aravindhakshan and made available to TRAFFIC in South-East Asia for communications and outreach work. It was chosen from several designs through an online poll by TRAFFIC’s Facebook fans in South-East Asia. The production of the stickers was funded by The Body Shop Foundation as part of a project to raise awareness of wildlife trafficking and galvanize public participation in the effort to tackle it.

Slow lorises are among a number of threatened species trafficked throughout the region for the pet and medicine trades. TRAFFIC has recorded the illegal sale of slow lorises as pets in markets in Indonesia, their use as a tourist photo gimmick in parts of Thailand, traded online in Brunei Darussalam and Malaysia, and their use in traditional medicines in Cambodia and Myanmar.

South-East Asia is home to the Sunda, Northern, Javan and Bornean Slow Lorises as well as the Pygmy Slow Loris; all are listed in Appendix I of the Convention on International Trade in Endangered Species of Wild Fauna and Flora (CITES), which means commercial international trade in them is not permitted.

Cooking up a storm to encourage legal and sustainable foods for the Lunar New Year holidays, instead of threatened wildlife

TRAFFIC warns of illegal trapping, trade and utilisation of owls around Diwali