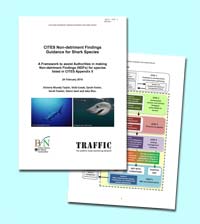 Trade in Anguilla species, with a focus on recent trade in European Eel A. anguilla

Artisanal Shark Trade in the Republic of the Congo