NEW YORK, 12th December 2012—Perceived by organized criminals to be high profit and low risk, the illicit trade in wildlife is worth at least US$ 19 billion per year, making it the fourth largest illegal global trade after narcotics, counterfeiting, and human trafficking, according to a new report commissioned by WWF. 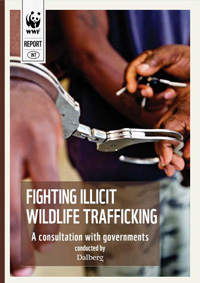 Besides driving many endangered species towards extinction, illegal wildlife trade strengthens criminal networks, undermines national security, and poses increasing risks to global health, according to the report, Fighting illicit wildlife trafficking: A consultation with governments, which will be unveiled today at a briefing for United Nations ambassadors in New York.

“Wildlife crime has escalated alarmingly in the past decade. It is driven by global crime syndicates, and so we need a concentrated global response,” says Jim Leape, Director General of WWF International.

Much of the trade in illegal wildlife products is run by sophisticated criminal networks with broad international reach. The profits from wildlife trafficking are used to purchase weapons, finance civil conflicts and underwrite terrorist-related activities, the report finds.

The involvement of organized crime syndicates and rebel groups in wildlife crimes is increasing, according to interviews with governments and international organizations conducted by global advisory group Dalberg on behalf of WWF.

Report respondents agree that the absence of credible law enforcement, prosecution, penalties and other deterrents to wildlife trafficking reduces the perceived risks for criminal groups. They also say that consumer demand is exacerbated by the increased accessibility of illegal wildlife products through the internet.

“The demand for illegal wildlife products has risen in step with economic growth in consumer countries, and with the ‘easy money’ and high profits to be made from trafficking, organized criminals have seized the opportunity to profit,” said Steven Broad, Executive Director of TRAFFIC, the wildlife trade monitoring network.

Report interviewees stressed that illegal wildlife trade is almost always seen by governments as exclusively an environmental problem and is not treated as a transnational crime and justice issue.

“Governments need to address wildlife crime as a matter of urgency,” Leape said. “It is not just a matter of environmental protection, but also of national security. It is time to put a stop to this profound threat to the rule of law.”

Government officials say that a systematic approach is needed to fight illicit wildlife trafficking including greater resourcing, inter-ministerial cooperation, and the use of modern intelligence-led investigative techniques to identify and prosecute wildlife criminals.

Finally, governments and non-governmental organizations have an important role in holding countries publicly accountable for delivering on their international commitments, the report says. The Elephant Trade Information System, managed by TRAFFIC on behalf of Parties to CITES, and the recent WWF Wildlife Crime Scorecard provide examples of reporting initiatives that highlight countries failing to uphold their commitments.

Trading Years for Wildlife: An investigation into wildlife crime from the perspectives of offenders in Namibia