NEW GUIDANCE WILL BE A MILESTONE IN cites’ EFFORTS TO COMBAT DEMAND FOR ILLEGALLY TRADED WILDLIFE.

Direct overexploitation is the second most significant driver of biodiversity loss, threatening a million species with extinction. Of the 38,000 species of wildlife listed in the CITES Appendices, almost 6,000 were recorded in seizures of illegal wildlife traded internationally between 2018 and 2020.

A huge diversity of use types underpins consumer demand for wild species. These range from luxury use and the desire for commodities from iconic, especially rare, and hard-to-acquire animals such as the pachyderms and big cats, to demonstrate wealth or status, through to the demand for a myriad of fish, timber, and medicinal and aromatic plant species, for food, furniture, and medicines.

Governments, NGOs, and others have undertaken extensive efforts over the years to raise awareness of the extinction threats such demand causes. Sadly, there are still consumers who desire commodities that are illegally acquired and unsustainably harvested from wild fauna and flora.

The recent shift away from physical markets to online shopping has enabled people to purchase almost anything from anywhere. Further, increases in disposable income during the past two decades have led to increased consumption broadly, in turn enabling the burgeoning use of species. Endangered primates, birds, ungulates, and reptiles are now desired for novelty - rather than nutrition - focused wild meat tasting experiences in African and Asian urban centres; and ownership of ‘exotic’ pets such as otters, lorises, parrots and some lizards, is also on the rise. Meanwhile the continued destruction of precious hardwoods such as rosewoods in South America and Madagascar, not only still supplies multiple markets around the world but also opens up previously inaccessible areas to new infrastructure development. This in turn provides access to previously protected populations of wildlife for unscrupulous exploitation and increases the risk of zoonotic spillover.

Urgent action is required to reverse these worrying trends.

While various CITES resolutions and decisions had previously tried to address demand reduction in a species-specific manner, CoP17 broke new ground through the adoption of the first cross-species Resolution (Resolution Conf. 17.4). This recognised that while “enforcement interventions play a critical role in stemming illegal trade in specimens of species included in CITES Appendices… without a complementary effort to address the persistent market demand that drives this trade, enforcement action alone may not be sufficient to eliminate this threat”.

In 2018, TRAFFIC led a review of Parties’ experience delivering against this Resolution, and found that the most requested form of support was around how best to achieve behavioural changes.

Parties at CITES CoP18 subsequently agreed on the development of CITES Guidance on demand-reduction strategies to combat illegal trade in CITES-listed species, and TRAFFIC was engaged to produce the first draft. Furthermore, feedback received from a consultation workshop held online in June 2021 informed the development of an updated draft, which was then reviewed and agreed upon by SC74 for submission to CITES CoP19. Parties at the upcoming Conference in Panama will now be deliberating on its full formal adoption.

TRAFFIC strongly believes that the use of behavioural change techniques will be vital in helping to finally shift consumer choice and reduce the threat of illegal trade and direct overexploitation of wild species. The Guidance proposes a Five Step process and 10 Benchmarks for Behaviour Change, to support all those interested to use such techniques. During the document review process, regional workshops focused on the Guidance were requested by Parties, to help provide context-specific information and national examples. Through the support of the UK government, TRAFFIC recently delivered one such workshop, kindly hosted by SERFOR in Lima, Peru. This attracted delegates from 12 countries in South and Latin America, and the Caribbean region, and reinforced the relevance and utility of the Guidance in helping all those aiming to reduce demand for illegally traded species.

Rhino horn demand reduction project comes to a close, looks to the future 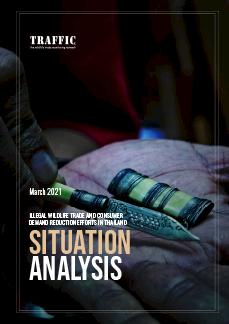 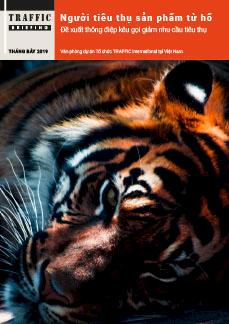 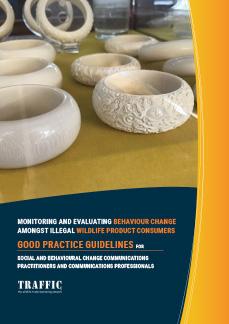