According to the 176-page study, The South Africa—Viet Nam Rhino Horn Trade Nexus: A deadly combination of institutional lapses, corrupt wildlife industry professionals and Asian crime syndicates (PDF, 3 MB), as early as 2003, visitors from Viet Nam were regularly taking part in “pseudo hunts” for White Rhino trophies in South Africa, interested not in the hunt itself but only in the horn; some of those participating in the hunting reportedly did not even know how to shoot a gun.

A decade ago the first signs were on the horizon of the forthcoming rhino poaching crisis, but few then could have foreseen the magnitude and ramifications of what we face today

Dr Jo Shaw, a Programme Officer with TRAFFIC and a co-author of the report

“However, with the surging demand from Asia, people willing to pay high prices to get their hands on rhino horn, and little fear of capture by those smuggling horn, it was perhaps inevitable that this ‘commodity’ would catch the attention of the hardened criminal fraternity, creating a ‘perfect storm’ for rhino poaching and horn trade.”

Although South Africa soon enacted a range of regulations to stamp out “pseudo hunting”, in response resourceful horn traders began recruiting others, including Thai sex-workers as “hunters”, to circumvent the new rules.

Meanwhile, criminals increasingly turned to other sources for horns: in recent years at least 65 rhino horns have been stolen from public display within South Africa with similar thefts carried out in the US and in Europe. 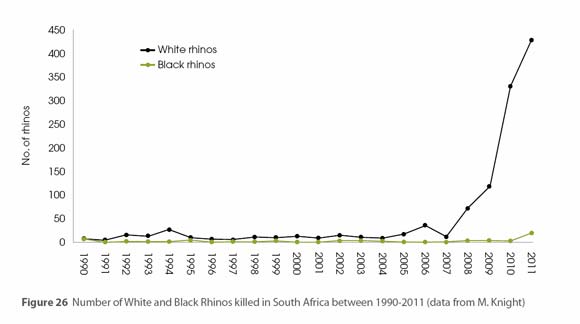 In 2009, the government of South Africa placed a moratorium on national sales of rhino horns to prevent unregistered stocks, so-called “loose horns”, from leaking into trade—all international commercial trade in rhino products is banned under the Convention on International Trade in Endangered Species of Wild Fauna and Flora (CITES).

Law-breaking wildlife industry individuals have since been convicted, with harsh prison sentences handed out for illegally dehorning live rhinos and the subsequent sale of the horns to Asian buyers. In April 2012, South Africa suspended the issuance of hunting licences to all Vietnamese nationals while also introducing other changes to tighten the loopholes allowing “pseudo hunts”.

“The web of complicity has even drawn in a small number of rogue game ranch owners, professional hunters and wildlife veterinarians, adding a new and challenging dimension to the rhino poaching crisis,” said Shaw.

Rangers in South Africa are putting their lives in jeopardy protecting the continent’s rhinos. Although more and more resources are being expended to protect the nation’s rhinos, South Africa has witnessed a rapid escalation in poaching of live animals, rising from 13 in 2007 to 83 (2008); 122 (2009); 333 (2010) to a record 448 rhinos in 2011. In early 2012, almost two rhinos were being poached every day. By 17th July this year, the total stood at 281 rhinos, with a predicted loss of 515 by year end if current poaching rates continue.

By 17th July this year, there had been more arrests (176) in South Africa for rhino-related crime than in all of 2010 (165), with middlemen and those higher up the trade chain increasingly being collared, including a number of high-level arrests of Vietnamese nationals since May 2012. Rhino crime syndicates in South Africa have been linked to other criminal activities such as drug and diamond smuggling, human trafficking and illegal trade in other wildlife products such as elephant ivory and abalone.

Of 43 documented arrests of Asian nationals for rhino crimes in South Africa, 24 have been Vietnamese (56%) and 13 Chinese (28%), with the remainder from Thailand and Malaysia. Furthermore, at least three officials based at Viet Nam’s Embassy in Pretoria have been documented as participants in the illegal rhino horn trade, although the last such case was in late 2008.

At the other end of the illicit trade chain, the report identifies Viet Nam as the main market, where demand for rhino horn continues to rise and serrated rhino horn grinding bowls are widely available for sale.

Four main user groups have been identified in Viet Nam: the principal one being those who believe in rhino horn’s detoxification properties, especially following excessive intake of alcohol, rich food and “the good life”. Affluent users routinely grind up rhino horn and mix the powder with water or alcohol as a hangover-cure and general health tonic.

Horn is also used as a supposed cancer cure by terminally ill patients, who are sometimes deliberately targeted by rhino horn “touts” as part of a cynical marketing ploy to increase the profitability of the illicit trade.

The surge in rhino horn demand from Viet Nam has nothing to do with meeting traditional medicine needs, it’s to supply a recreational drug to party goers or to con dying cancer patients out of their cash for a miracle rhino horn cure that will never happen

Tom Milliken, TRAFFIC rhino expert, and a co-author of the new report

“Ultimately the only long-term solution to stamping out rhino poaching in Africa and Asia lies in curbing demand for horn. The fact that the Vietnamese Government has not played a greater role in ensuring such an outcome is problematic, but presents an opportunity for decisive action beginning now.”

Last month, a Rhino Working Group under CITES was tasked with developing a demand reduction strategy for rhino horn and called upon the government of Viet Nam to table a report on measures it is taking to address the illegal trade.

“The only people benefitting from the current rhino poaching crisis are those running the criminal networks, who are making huge profits with little fear of prosecution in Asian markets,” said Milliken.

“This trade leaves a trail of carnage and hapless victims—both animal and human—from source to end-use market.”

The new report calls for a number of measures to be taken to address the current crisis, including for Viet Nam to “review and strengthen legislation and penalties concerning illegal rhino horn trade,” and to “employ effective law enforcement strategies in the market place.”

Ironically, the fate of South Africa’s rhinos is now inextricably linked with market forces in Viet Nam, a country that recently saw its own Javan Rhino population slip into ignominious extinction, when the last individual in Cat Tien National Park was shot and had its horn removed in early 2010. The Javan Rhino is the most Critically Endangered rhino species in the world.

“South Africa has progressively scaled up its response to rhino crime and there are indications it can win this battle,” says Mavuso Msimang, Rhino Issue Manager for the South African Department of Environmental Affairs.

“But we can only end the poaching and smuggling if it is addressed along the entire trade chain. We hope South Africa and Viet Nam can actively collaborate to stop the illegal trade in rhino horn.”

About the Rufford Foundation

The Rufford Foundation is a UK registered charity which funds nature conservation projects across the developing world. To date the Foundation has awarded grants to over 4000 projects in 156 countries.