New Delhi, India, 24th May 2012 - With Asia's big cats increasingly under threat in the wild, TRAFFIC's latest public service advertisement campaign reminds people that these felines are "Wanted Alive” in   their natural habitat! 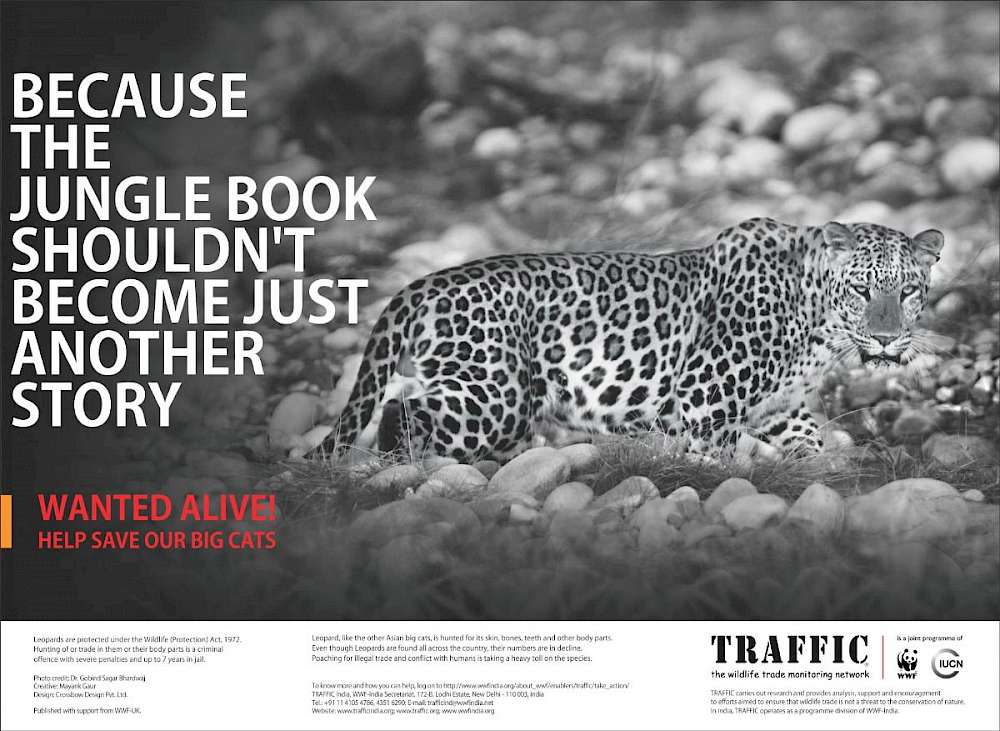 Campaign posters feature the four Asian big cats—Tiger, Leopard, Snow Leopard and Clouded Leopard—all of them threatened by illegal trade in their body parts. Strong messaging carried by the campaign ask readers to do their part to ensure the four species continue to live in the wild.

TIMES OOH has provided generous support for the campaign by offering hoarding sites and digital screens to TRAFFIC in India for display.

Large banners have been put up at the DND Flyway in Delhi, airports, metro stations, and other strategic locations across the country.

Illegal wildlife trade threatens the survival of Asian big cats in the wild. Besides existing markets, new emerging ones, such as those in Myanmar, are worsening the situation. The threat was highlighted at the recently concluded Global Tiger Recovery Programme Stocktaking meeting in New Delhi from 15-17 May 2012, attended by senior government officials from all 13 Tiger range countries.

TRAFFIC’s new campaign underlines the imperative need to protect Asian big cats in the wild. Tiger, Leopard, Snow Leopard and Clouded Leopard are found in a variety of habitats across India but are being killed for their body parts which are smuggled through porous borders to clandestine international markets.

The Snow Leopard from the Himalayan mountains and the high altitude cold deserts to the north is hunted for its fur. .

The little known Clouded Leopard inhabits the dense jungles of north-eastern India and is also largely hunted for its beautiful coat, patterned with cloud like markings. There is also trade in its bones for medicines, meat for exotic dishes and live animals for the pet trade. Its canines and claws are also used for decorative purposes.

The Tiger is the largest cat species in the world which is threatened by illegal trade in its bones and skins. The bones are valued in traditional East Asian medicines, and the skin used by wealthy individuals to decorate their houses, tents or clothes. TRAFFIC estimates that body parts of nearly 500 Tigers have been recovered from illegal traders in India during 2000-2011. Many more Tigers may have been killed and smuggled out, undetected.

The future of the Leopard is equally precarious. Although found all across India, Leopards are being poached in large numbers. Besides the skin that is used for decorative purposes, body parts are used a substitute for Tigers in traditional East Asian medicines.

Mr MKS Pasha, Associate Director and Interim Head of TRAFFIC India says, “Preserving our wildlife should be a concern for everyone. Protecting species, means protecting their forests and other habitats, and that also means securing the water quality in our rivers and other water supplies. Wanted Alive is TRAFFIC India’s message to the public towards conservation of Asian big cats. Inherent respect for our wildernesses will go a long way in helping secure our natural treasures.”

Mr Ravi Singh, Secretary General & CEO of WWF-India further adds, “Poaching has become the single largest threat to these cats in the wild. WWF-India and TRAFFIC have worked tirelessly to highlight the gravity of this threat, most recently at last week’s Global Tiger Recovery Programme Stocktaking meeting. People across India need to recognize the importance of the Tiger to our country’s image, and help stop those who would plunder our national treasure for their greed.”

Mr Sunder Hemrajani, MD, Times OOH said, “Times OOH wholeheartedly supports the cause of protection of wildlife undertaken by TRAFFIC and WWF-India. It is important for people to understand their role in wildlife conservation. Our various premium properties offer such an opportunity as they reach out to such an audience that can pioneer this change. We are happy to promote and be a part of this cause.”

The campaign was designed by Crossbow Designs with support from WWF-India.