Wildlife Trafficking in The Mekong

Bangkok, Thailand, 4th June 2021–A new video depicting some of the thousands of illegal wildlife parts and products found for sale in the Lower Mekong underscores the region’s continuing struggle to address wildlife crime and the need to ramp up anti-trafficking efforts.

The Lower Mekong region, comprising Cambodia, Lao PDR, Myanmar, Thailand and Viet Nam, has long been recognised as a hotbed for illegal wildlife trade. Despite decades of scrutiny, enforcement and policy interventions, the open, illegal and unregulated markets selling wildlife continue to operate, as evidenced by survey results in five of the Lower Mekong countries.

Close to 78,000 illegal wildlife parts and products were found for sale in more than 1,000 outlets in select towns and cities in the five countries throughout 2019 and 2020.

Parts and products from a wide array of species were found during the surveys, including bears, big cats, helmeted hornbill, pangolin, rhinoceros, and serow, but elephant ivory was most prominent. Multiple types of products were also found to have been derived from individual species. For instance, pangolins scales were found raw and ground for medicinal use, as well as being carved into jewelry or sold as talismans.

The variety and prevalence of illegal wildlife trade in several locations emphasised that the circumstances facilitating illegal trade have not only remained but, in some cases, proliferated." 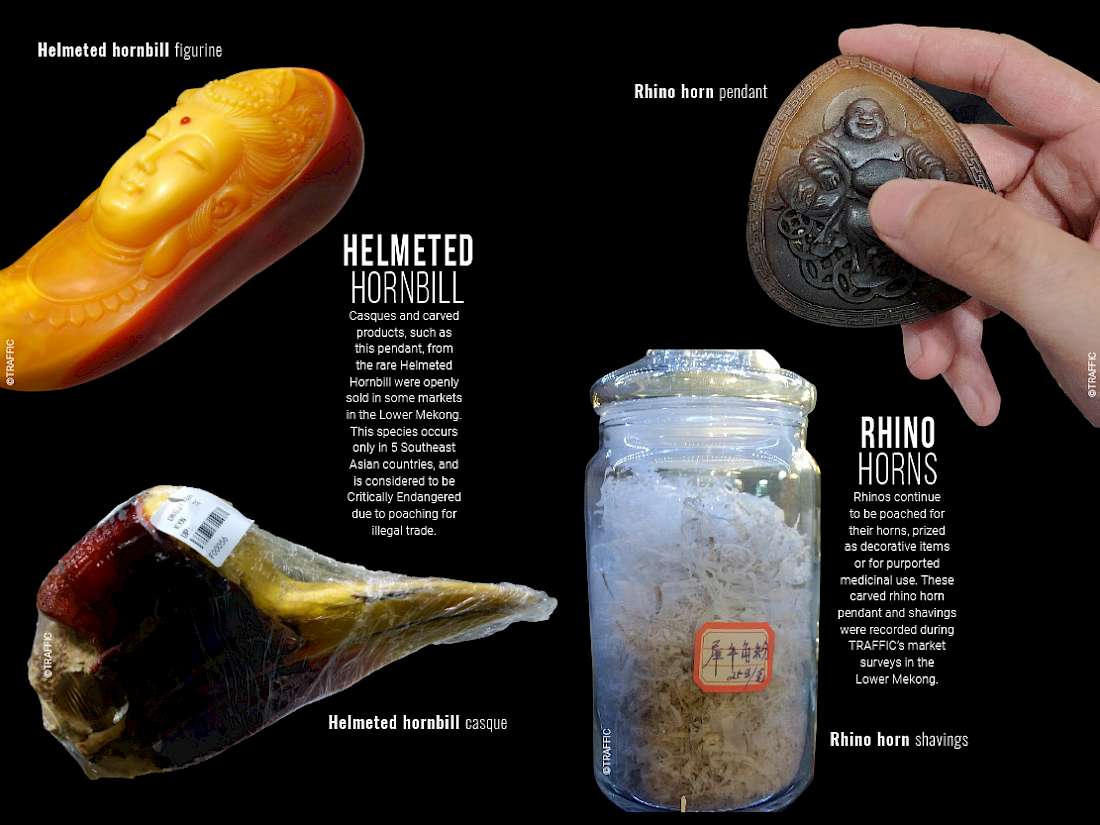 The surveys and video are the latest outputs in TRAFFIC’s 30 years of conducting research and investigations into markets in this region. A series of more detailed analysis on ivory trade and trade in specific locations in the Lower Mekong will follow in the coming months.

Among these are the Special Economic Zones (SEZs) established in many of the Lower Mekong countries to encourage increased trade and investment, jobs, and an overall socio-economic improvement of countries.

These SEZs have expanded over the years and become hotspots for the illegal wildlife trade. Among these are Boten and Bokeo in Lao PDR, and Sihanoukville in Cambodia.

The video highlights some efforts to address the region’s challenges, including building the capacity of enforcement officers in wildlife crime investigations, providing tools to boost the identification and detection of illegally traded wildlife in markets, and tackling the demand for wildlife parts and products. However, given that the trade endures and even thrives, it advocates continued investigations into the illegal wildlife trade and a firmer and sharper response to the complicated problems in this area.

In December 2020, Vietnamese authorities seized 93kg of African rhino horns from a warehouse near the International Airport in Ho Chi Minh City, reinforcing that the pandemic has not been a deterrent against wildlife crime and raising questions on stocks and future supply into the market.

“It would be naïve to think that the pandemic alone will dampen wildlife crime in the long term. So, monitoring and investigations must continue. Ground-truthing is critical to accurately understand how traffickers, traders and consumers respond and adapt to changes”, said Kanitha Krishnasamy, Director for TRAFFIC in Southeast Asia.

"There's also a need for strengthening collaboration and public commitment from all governments in the region. The illicit wildlife trade problem here is not something countries can tackle on their own," said Krishnasamy.

The documentary is also available in the following languages:

Smuggled for its Song: The Trade in Malaysia’s Oriental Magpie-robins