Forest at the base of Mount Cameroon © A. Walmsley / TRAFFIC

Yaoundé, Cameroon, 24th November 2017—TRAFFIC has launched a series of new studies in Cameroon with a view to the improvement of governance of timber harvest and trade. The studies have been launched ahead of the 53rd ITTO Council meeting in Lima due to be attended by representatives from TRAFFIC.

Through five key studies conducted between 2012 and 2014 in Cameroon and the development of a forest legislation and control training manual together with its annexes, timber trade challenges were evaluated through the lens of the 2010 signed Voluntary Partnership Agreement (VPA) with the European Union (EU). 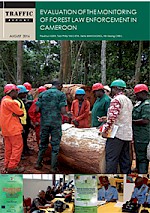 The forest sector in the Republic of Cameroon has undergone considerable reforms since independence in 1960. These reforms have focused on increasing the forest sector’s contribution to GDP and improving the livelihoods of local people through sustainable management. The forestry sector contributes F CFA456.9 billion (USD780.4 million) or 30% to the national economy and accounts for 4% of the GDP, with an annual production of about 2.3 million m3.

Although the current legislation and regulatory instruments have made provisions for the participation of local communities and decentralized structures in the management of forest resources, there are still challenges and incidences of illegality throughout supply chains.

For the integrity of forest agents in their daily work, the study proposed a code of conduct and professional ethics for personnel of the Ministry of Forestry and Wildlife on control mission. 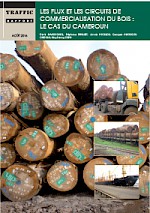 For the period from 2000 to 2012 the study revealed that although government quotas for Industrial timber production in Cameroon increased in volume, the actual levels of production remained relatively constant, with Triplochiton scleroxylon (Ayous) and Erythrophleum ivorense (Tali) being the top species harvested.  These two-species account for more than half of the total volume of the top ten most used species in both the domestic market and for international trade in Cameroon.

Industrial timber processing is principally in sawn wood and timber exports are mainly directed to Europe but increasingly to Asia, the largest importer of Cameroon logs during the period 2004 to 2012 being Greater China (including Hong Kong and Taiwan), which accounted for 55% of the average exports.

Timber processing and export in Cameroon still faces a number of challenges including: onerous and protracted procedures to register as a timber processor, legal and legislative weaknesses and procedural flaws that facilitate illegal exportation, and the lack of information sharing between relevant agencies, in particular the Department of Trade and the Ministry of Forestry and Wildlife (MINFOF).

Forest taxation is inefficiently captured as the laws are weakly enforced and do not cover the entire sector. Forest control needs to adapt to the growing illegal logging that is causing substantial loss of income throughout global supply chains, currently estimated at F CFA7428 billion (EUR11.32 billion) per year worldwide.

Formalization and promotion of the domestic timber market is a rapidly growing market and an important source of employment and revenue to the State. 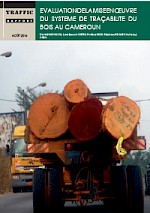 Europe is the main market for timber from Cameroon. The VPA of the Forest Law Enforcement, Governance and Trade (FLEGT) is a mechanism to promote good governance and sustainable forest management. It was hoped that by 2013 the first FLEGT certificate would have been issued but has not been the case despite Cameroon being one of the first signatories.

Considering the limited funds of the State and its inability to control the resources and revenue from logging or support its monitoring and law enforcement, a computerized database (SIGIF) to facilitate timber monitoring and traceability was established in 1999 as part of the VPA / FLEGT process. MINFOF is now working on the development of an updated system, SIGIF II.

At the time of the study, progress is reported in terms of MINFOF staff training and the signing of certain laws. However, the process that will result in the implementation of this system is protracted  and faces a number of challenges including inadequate resources and persistent corruption. The introductory options for timber in transit in the traceability system were tested; the development of a common IT platform for issuing FLEGT licences is also planned and will be located and operated at the FLEGT desk to port. 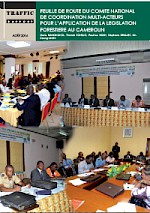 A key leverage of forest governance and sustainable management of forest resources is co-ordination of action among all forest law enforcement services. The study revealed that several stakeholders are working and are required to work with MINFOF.

There is a fairly strong relationship between MINFOF and the actors of the forestry profession (wood industry unions and operators) on the one hand and independent observers on the other. The relationship is justified for some by the need to comply with current regulations in forestry in Cameroon but also as a way of defending their interests.

With other sectoral ministries such as the Ministry of Defence (MINDEF), Ministry of Finances (MINFI), Ministry of Justice (MINJUSTICE), Ministry of Transport (MINTRANSPORT), Ministry of Environment, Nature Protection and Sustainable Development (MINEPDED) to name but a few, there is an encouraging level of collaboration. However, its effectiveness could be further improved given the overlapping missions of each ministry. With this category of actors, it is hoped that collaboration with MINFOF will intensify. One of the best ways to make this a reality is the development of a multi-stakeholders’ co-ordination committee.

More than one initiative has been identified within this work and all have experienced failures in their functioning or operationalization. One of the initiatives of grouping multi-stakeholders under a committee is the Interministerial Committee for facilitating the implementation of a sectoral programme forests / environment, created by Decree No. 100 / PM of 11th August 2006, although it has met with little success. Aside from the conflict of jurisdiction and purpose, the main dysfunction of the committee is the fact it is chaired by the Ministry of Economy and Finance rather than being technically administered by MINFOF. This study proposed a draft text for establishing a multi-stakeholder national co-ordination committee with the aim of strengthening the national process for controlling illegal logging and associated trade, to be placed at the level of the Prime Ministry offices for co-ordination. 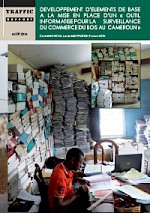 Despite efforts by MINFOF in the process of timber trade transparency and the fight against illegal logging, there is an absence of a true functional timber traceability system, relevant resources and references materials, resulting forest litigation, relevant statistics on illegal logging and regular update of published information.

The study, which was part of improving the transparency of the timber legality system in Cameroon, notes the shortcomings of the current system in combatting illegal logging. The study highlights the need to develop a tool for information amongst law enforcement agencies in order to lend credibility to Cameroon’s forest sector at national and international levels.

A training manual on "Forest Legislation and Control: Towards a concerted fight against illegal logging" was developed to help improve the governance and transparency of logging and timber trade in Cameroon. It supports the resolution of problems relating to the unsustainable exploitation of timber and the weak application of the forest law.

The training manual is a tool for trainers, Justice departments, Police and Gendarmerie, helping to understand better the missions of all actors in the chain of control. It is intended to be dynamic and usable by all other stakeholders as well as in forestry and administrative schools and Customs institutes.

The studies conducted under the framework of the project TFL-PD 003/09 Rev. 2 (M) "Strengthening the national process for controlling illegal logging and associated trade in Cameroon" were funded by the International Tropical Timber Organization (ITTO) and to some extent in collaboration with WWF France, specifically for the timber trade routes flows.

About the International Tropical Timber Organization

The International Tropical Timber Organization (ITTO) is an intergovernmental organisation promoting the conservation and sustainable management, use and trade of tropical forest resources. Its members represent the bulk of the world’s tropical forests and of the global tropical timber trade.

An overview of timber trade in East and Southern Africa