Some progress, but still a long way to go: Biodiversity summit in Korea concludes 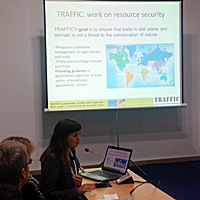 “TRAFFIC welcomed the call for integration of biodiversity into the forthcoming new sustainable development goals and the many important technical decisions taken to support the sustainable use of biodiversity, but there needs to be adequate financial and technical support from world governments to prevent the ongoing unregulated and unsustainable exploitation of wild fauna and flora,” said Roland Melisch, who led TRAFFIC’s delegation to CBD CoP12.

TRAFFIC also supported capacity building to achieve the integration of these issues into national biodiversity strategies and action plans (NBSAPs) across terrestrial and marine ecosystems.

“TRAFFIC stands by, ready to support CBD Parties in implementing their NBSAPs to achieve the Aichi Biodiversity Targets,” said Melisch.

TRAFFIC’s perspectives on some of the main outcomes from the meeting were as follows:

Global Biodiversity Outlook Report
The CBD’s Strategic Plan, which includes 20 Aichi Biodiversity Targets to be achieved by 2020, was agreed by the world’s governments in Nagoya in 2010. It represents the only global unified agenda to tackle the ongoing biodiversity loss, including that induced by unsustainable and illegal exploitation of wild plants and animals, and aims at enhancing the benefits to biodiversity conservation and human well-being that derive from harvest and trade at sustainable levels. The fourth edition of the Global Biodiversity Outlook (GBO-4) which was released in Pyeongchang at CoP12, however, demonstrated that many countries are still far from fulfilling the ambitions of that plan. TRAFFIC, who contributed to GBO-4, believes that bold, accelerated and innovative action is urgently required if governments are to meet the globally-agreed Strategic Plan to bring about an improvement in the status of biodiversity. The latest CoP12 urged Parties to take comprehensive and urgent measures necessary to ensure the full implementation of the Strategic Plan for Biodiversity 2011-2020 including the corresponding NBSAPs.

Sustainable Use and Conservation of Plant Biodiversity
The Plant Conservation Report 2014 mirrors GBO-4 in relation to the state of and pressures on plant biodiversity, and the progress made by Parties towards achieving the targets of the Global Strategy for Plant Conservation (GSPC).  Launched at CoP12, the Report shows in greater detail than GBO-4 the value of wild plants, both to the global economy and to local communities, and asseses their conservation status around the world.

TRAFFIC remains deeply concerned about the rate of progress towards delivery of a number of the GSPC Targets, in particular those related to in situ conservation and sustainable use of wild plants. However TRAFFIC welcomes the continued recognition of the GSPC and its toolkit as a valuable tool in the CBD’s Strategic Plan, and the Decision taken by the Parties to continue supporting capacity building activities on plant conservation. Further information.

Sustainable Wildlife Management and Bushmeat
TRAFFIC has provided substantial input to this work stream of the Convention since 2008, and joined the Collaborative Partnership on Sustainable Wildlife Management (CPW) as a founding member, a voluntary partnership of international organizations with substantive mandates and programmes for the sustainable use and conservation of wildlife resources that was formed in the margins of CBD CoP11 in Hyderabad, India. TRAFFIC considered the Decision mandating the CBD Secretariat to work with the CPW to prepare technical guidance on the role of sustainable wildlife management to support Parties in developing and implementing integrated sustainable wildlife management programmes as a very positive move.

The Decision also asks Parties and relevant organizations to strengthen financial and technical support to developing countries for the establishment and implementation of effective traceability, monitoring and control systems for bushmeat at the national and local levels – also to help develop national and local wildlife surveillance systems to strengthen countries’ biosecurity associated with bushmeat consumption and trade practices. Furthermore, enhanced co-operation was requested between national focal points of the CBD and the Convention on International Trade in Endangered Species of Wild Fauna and Flora (CITES) on sustainable wildlife management, including bushmeat, to ensure synergies between the two Conventions.

TRAFFIC specifically welcomes that Parties are encouraged to develop, revise or update their regulatory systems to differentiate between subsistence uses and illegal hunting, and domestic and international trade of specimens of wild species and products, in a mutually supportive manner with CITES and other international obligations so as to avoid penalizing both the countries and the people using wildlife resources for subsistence purposes; to strengthen the capacity of indigenous and local communities to exercise their rights and responsibilities in relation to the sustainable management of wildlife; and to review, and, as appropriate, reform, incentives that might encourage unsustainable consumption of bushmeat. TRAFFIC believes that these steps are essential ones to mitigate the over-exploitation and illegal wildlife trade that strongly undermine efforts to achieve the Aichi Biodiversity Targets.

Biodiversity and Health
TRAFFIC welcomed the advanced draft report on “Connecting Global Priorities: Biodiversity and Human Health”, to which it has already provided input and continues to do so. TRAFFIC also warmly welcomed the Decision on the continued joint collaborative work between the CBD Secretariat and the World Health Organization (WHO), including on regional capacity-building workshops in additional regions, and on building interlinkages between biodiversity and health. In times of increased need for attention to zoonotic diseases that are, inter alia, transmitted by wild meat consumption and at the same time the recognition of dwindling medicinal resources from wild biodiversity, this collaboration is ever more needed. TRAFFIC appreciates that the results of collaborative work on biodiversity and health will be presented by the CBD Secretariat to the 68th World Health Assembly of the WHO, but would have liked to see further stronger recognition of the importance of medicinal plants in the delivery of primary health care and their contribution to livelihoods, e.g. by a Decision of CoP12 also welcoming the ongoing revision of the WHO/IUCN/WWF/TRAFFIC Guidelines on the conservation of medicinal plants undertaken by co-author organizations, with strong encouragement to use them by Parties and relevant organizations as soon as they are available.

National Biodiversity Strategies and Action Plans
Parties that have not yet done so were urged by CoP12 to review, update and revise their national biodiversity strategies and action plans (NBSAPs) in line with the Strategic Plan for Biodiversity 2011-2020, to adopt indicators at the national level no later than October 2015, and to submit their fifth national reports. CoP12 also called for the provision of support and capacity-building for this process. TRAFFIC welcomes this call and sees the integration and mainstreaming of the three objectives of the CBD at the national level as an essential element of success to achieve the Convention’s Strategic Plan.

Finances and Resource Mobilization
Whilst Parties concur in recognition of the rising global biodiversity crisis, TRAFFIC considers their responses still seem insufficient to stem this downward trend and safeguard the world’s diversity of flora and fauna and the human livelihoods depending on them. The level of ambition was still far from meeting the needs that arise from the information provided in GBO-4 and from the results of the High Level Panel on resources needed for the Aichi Biodiversity Targets. However, there were three positive signals: an all-Party agreement to mobilize domestic financial resources from all sources to reduce the gap on financing their respective NBSAPs; the commitment made by developed countries to doubling international financial flows for biodiversity; and an agreement by Parties to increase efforts on capacity building for mobilizing resources.

Marine and Coastal Biodiversity
Parties to CBD CoP12 further acknowledged more than 150 “ecologically or biologically significant marine areas” (EBSAs) across the world’s oceans, including in areas within as well as beyond national jurisdiction. TRAFFIC recommends that in a next important step, systems of sustainable management need to be developed by Parties to maintain the biodiversity and ecosystem services contained in these EBSAs, as agreed under the Aichi Biodiversity Targets.

Nagoya Protocol on Access and Benefit-sharing
TRAFFIC welcomed the entry into force on 12th October 2014 of the Nagoya Protocol, a treaty under CBD that aims at ensuring regulated access to genetic resources whilst addressing a mandatory fair sharing of the benefits that could be derived from those resources. The Protocol was adopted during CBD CoP10 in Nagoya, Japan, in 2010. Whilst the entry into force brings achievement of Aichi Biodiversity Target 16 closer to fulfilment by 2015, TRAFFIC continues to encourage Parties to develop appropriate legislative, administrative, and policy measures at all levels in order to operationalize the Nagoya Protocol on the ground. TRAFFIC further encourages those CBD Parties that have not yet ratified the Nagoya Protocol to advance their national processes and adhere to it in order to achieve as broad a coverage of the Protocol’s provisions as possible.

Indigenous Peoples and Local Communities: Recognition and Traditional Knowledge
CoP12 finally agreed on a long-standing demand of Indigenous and local communities (ILCs) and also a recommendation of the United Nations Permanent Forum on Indigenous Issues on the use of the terminology “indigenous peoples and local communities” (CBD Article 8j) in future decisions and secondary documents of the CoP. TRAFFIC welcomes this decision, although it comes with caveats and will not have a bearing on any past decisions or change the meaning of the Text of the Convention.

TRAFFIC also welcomes CoP12 encouraging Parties and ILCs to consider how indigenous and local communities might effectively participate in the development, collection and analysis of data, including through Community-Based Monitoring, and to explore further how ILCs’ Community-Based Monitoring and Information Systems can contribute to the overall monitoring of Aichi Biodiversity Target indicators. The plan of action on customary sustainable use of biological diversity was also endorsed and there is a request for support for ILCs to develop community plans and protocols to document, map, and register their community conservation areas.

TRAFFIC thanks the following organisations and institutions for their support directed towards specific side-events co-organized by TRAFFIC and/or for their general support for TRAFFIC’s expert participation during CBD CoP12:

* The Polifund measure, implemented by the Deutsche Gesellschaft für Internationale Zusammenarbeit (GIZ) GmbH on behalf of the German Federal Ministry for Economic Cooperation and Development (BMZ), which combines the expertise and resources of five German ministries, as well as international organizations and NGOs to combat poaching and the illegal trade in wildlife products (ivory and rhino-horn) in Africa and Asia.

(1) Currently (Oct 2014), there are 194 Parties to CBD [http://www.cbd.int/convention/parties/list/]. Amongst the small number of non-Parties are Andorra and the United States of America.
(2) The “Aichi Biodiversity Targets” are named after the prefecture of Aichi where CBD CoP 10 took place in 2010.
(3) Named after Gangwon province where CBD CoP 12 took place in 2014.