Cambridge, UK, 29th April 2015—Despite being illegal, the use of nocturnal slow lorises as a tourist souvenir photo prop has grown in recent years, finds a study published today in the latest issue of the TRAFFIC Bulletin, the world’s only peer-reviewed journal dedicated to studies of global wildlife trade. 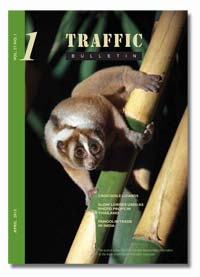 The use of slow lorises as props is now firmly established in Phuket’s tourism areas, with confiscations of specimens having no noticeable impact on the numbers being used by touts, who face comparatively small penalties if caught, finds the study.

Meanwhile, the Crocodile Lizard of China and northern Viet Nam is on the brink of extinction due to habitat loss and over-collection for local use, and from a growing interest for this species from hobbyists. Due to its sedentary behaviour and specialization, extirpation of the lizard in the wild is predicted if forest protection is not improved and illegal poaching curtailed, according to a paper also published in this issue.

Other features in the latest TRAFFIC Bulletin cover the illegal trade in and use of pangolin body parts in India as a protein source and as an ingredient in traditional medicine, despite legislative protection. The authors call for a multi-faceted approach encompassing improved public awareness, better law enforcement and involvement of traditional medicinal users and practitioners in initiatives to catalyse action so that the exploitative threat to pangolins in India can be reduced and their long-term conservation secured.

The use of wild meat by indigenous communities along the coast of Bird’s Head Peninsula in West Papua is investigated, and a report included on the progress of FairWild certification at two sites in India which has resulted in the first company in the country to be awarded a FairWild certificate.

Also included is an item on the conclusion of a project undertaken to improve forest governance in four Latin American countries—Brazil, Colombia, Ecuador and Peru as well as summaries of the recent Kasane Conference in Botswana on illegal wildlife trade and on the outcomes from CoP12 of the Convention on Biological Diversity. A section is also devoted to some of the significant wildlife seizures and prosecutions that have recently taken place around the world.

The TRAFFIC Bulletin provides news on the trade in wildlife resources, the latest in related legislation, investigations and seizures, and original reports.

Breaking the Ice: International trade in Narwhals, in the context of a changing Arctic

The State of Wildlife Trade in China 2007