Cambridge, UK, 30th October 2014—The October 2014 issue of the TRAFFIC Bulletin launched today is packed full of fascinating insights into wildlife trade, including features on the orchid trade in Iran, regional economic integration organizations, and wildlife trade in Morocco. 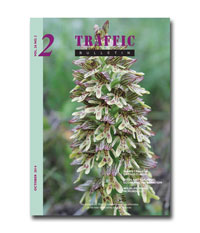 The orchid trade in Iran feature describes how between seven and 11 million orchids are estimated to have been illegally harvested during 2013 for their tubers, the ground flour of which is used as an ingredient in the production of ice cream and a hot, milky drink called salep. The tubers are collected widely from the wild in Asia Minor, Iran and the north-eastern Mediterranean region and the trade has been boosted by international demand, principally from Turkey, which is the main consumer in the region. The need for active measures to protect orchid species from over-harvesting is explored, including the feasibility of establishing sustainable, less destructive harvesting practices.

Another feature looks at the benefits arising from regional economic integration initiatives, which include increased supply and access to markets and shared natural resources, but which also present challenges to their management and regulation, including that of the global trade in wildlife, particularly of species listed in the Appendices of CITES (Convention on International Trade in Endangered Species of Wild Fauna and Flora).

The latest TRAFFIC Bulletin also reports on the flourishing ivory trade in Luanda, Angola, which has the largest illegal ivory market in southern Africa, most of it originating in Central Africa, where elephant numbers are in sharp decline. According to recent surveys, the ivory, in the form of small carvings and jewellery, is mainly purchased by Chinese and other East Asian workers based in the country.

Also examined is Malaysia’s trade in Serows Capricornis sumatraensis, an ungulate species fully protected by domestic legislation, and yet in decline, principally as a result of hunting for its meat and body parts, especially heads, which are used in Malay traditional medicine.

Meanwhile, other topics include the findings of surveys of wildlife markets undertaken in Morocco and Saudi Arabia.

The TRAFFIC Bulletin, the only peer-reviewed journal dedicated to wildlife trade issues is distributed free of charge to conservation agencies, NGOs and libraries, particularly in developing countries. You too can either download the latest issues from the TRAFFIC website, or receive them automatically by registering here.

While we are committed to ensuring the information vital to conservation efforts on wildlife trade issues is made freely and widely available, if you are in a position to support our efforts to continue doing so, please consider making a donation to help—thank you!