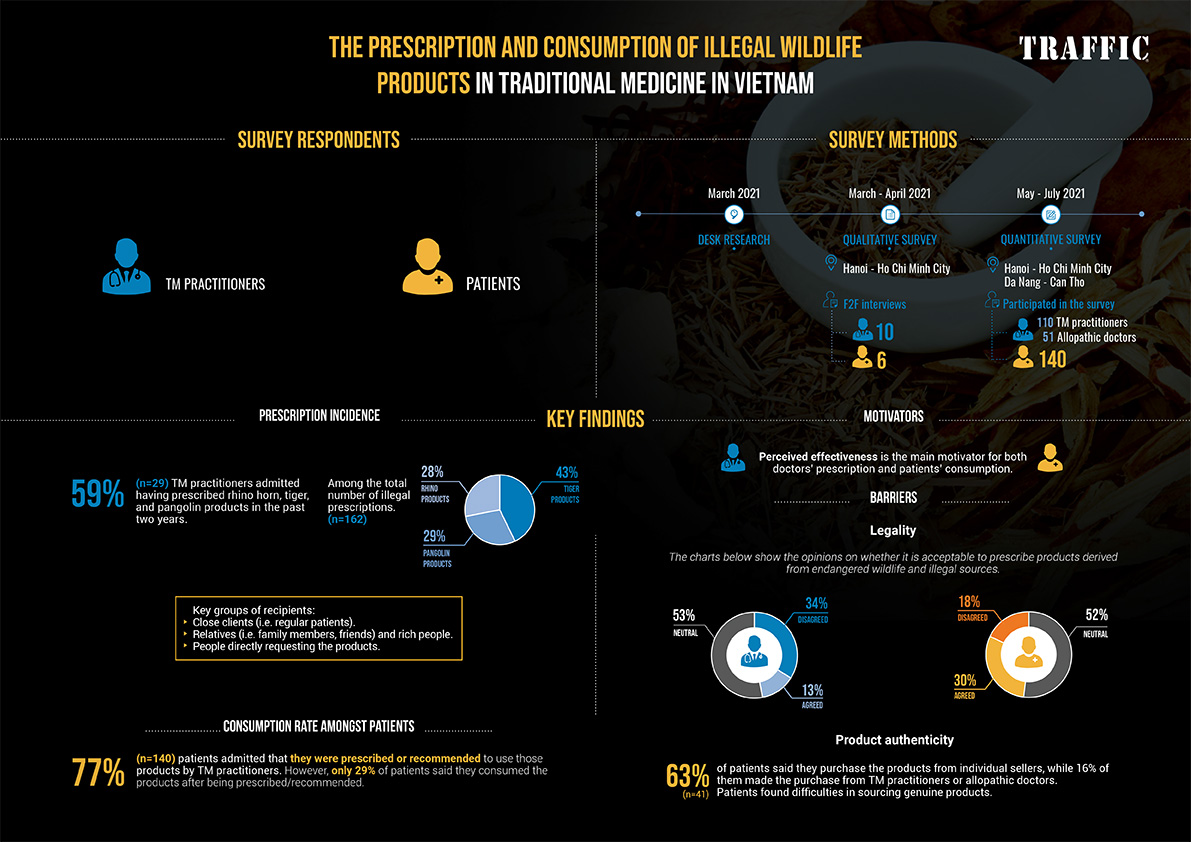 Key findings from the survey indicate that 59% of the TM practitioners admitted having recommended illegal products (of threatened species such as rhino horn[1], tiger[2], and pangolin[3]) to patients in the past two years. Although 71% of patients surveyed have never used wildlife products in the past, 68% admitted that they might use them in the future.

To better understand the user’s behaviours, the survey also researched the factors that are driving or preventing doctors and patients to use illegal wildlife products:

However, despite the decrease in prescription among TM practitioners, patients’ motivation to consume wildlife products remains the same, especially for tiger products, believed to cure bone diseases. Those alarming findings show that driving down the demand is still critical to reducing the impact of the practice on wildlife.

“This survey lays the groundwork for behaviour change campaigns that can address the motivations behind rhino horn and other illegal wildlife products prescription and consumption in TM. TRAFFIC intends to use the recommendations for its work in Viet Nam and encourages the TM practitioners, wildlife NGOs, and government partners to become messengers of social behaviour change messaging campaigns to influence their peers and patients.”

Building on the findings, the factsheet provides final recommendations about messages and messengers to use in future demand reduction efforts: TM practitioners would be more receptive to messages focusing on the reputational risks and social unacceptability of the act, while patients would rather react to messages warning about the lack of scientific evidence on the medical functions and effectiveness of the products. However, promoting the use of safe, legal, and sustainable TM alternative ingredients seems to be paramount for both respondents.

Available in two languages, this factsheet will be distributed in Viet Nam, during future events and workshops organised by TRAFFIC and partners.

[1] On the IUCN Red List of Threatened Species, the black rhino, javan rhino, sumatran rhino are listed as “Critically Endangered”,  and the white rhino is listed as “Near Threatened”

The survey is part of the initiative to reduce the use of rhino horn as a medicinal remedy funded by WWF Germany. Such effort is crucial in contributing to sustaining the population of rhinos and other endangered species and the balance of the whole ecosystem.

Observations on the illegal pangolin trade in Lao PDR