Turning the tide for marine turtles

The Hague, Netherlands, 12 June 2007—Over-exploitation of marine turtles in legal fisheries and through illegal harvest and trade poses a major threat to the survival of marine turtles across the Wider Caribbean Region, according to a new report launched today by TRAFFIC, the wildlife trade monitoring network.

Turning the tide for marine turtles

Marine Turtles disperse widely throughout the Caribbean. They are targeted for their shells, meat and eggs; the former frequently end up as personal items and curios purchased by tourists. A significant, but unknown number of turtles are also taken as bycatch in industrial and artisanal fisheries.

“Protection measures for marine turtles are extremely patchy—turtles may be adequately protected in some waters, but then travel into areas where they are at risk from unmanaged or illegal take,” said Steven Broad, TRAFFIC’s Executive Director.

“Caribbean nations need to improve their co-operation to manage and conserve the region’s turtles,” he said.

Turtle eggs generally enjoy better legal protection than the animals themselves, but the marketing of eggs is open and widespread in parts of Central America.

In Guatemala, virtually every turtle egg laid is collected for human consumption. Conversely, in Costa Rica, most eggs in trade derive from a well-managed sustainable-use programme operated at Ostional.

Although there have been major advances in marine turtle research and conservation, loosely regulated and largely unmanaged exploitation of marine turtle persists in over half the 26 Wider Caribbean countries and territories surveyed for the report—the Lesser Antilles, Central America, Colombia and Venezuela.

Despite the many concerns raised, the report is optimistic about the future because of the many innovative and pioneering ways being found to address the threats to turtles in the region.

“This includes the growing contribution and beneficial involvement of rural communities and partnerships between governmental and non-governmental bodies,” said Dr Karen Eckert, a co-author of the report.

“When local people have opportunities to help monitor and safeguard turtles, the investment in turtle conservation is also an investment in people and their future livelihoods”, she said. 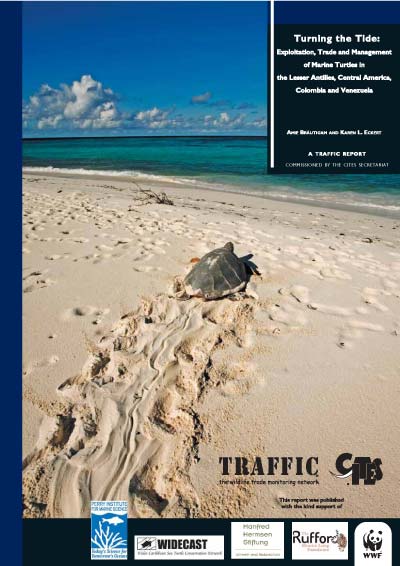 Turning the Tide: Exploitation, Trade and management of Marine Turtles in the Lesser Antilles, Central America, Colombia and Venezuela was commissioned by the CITES Secretariat and released today at the CITES conference currently underway in The Netherlands.

Delegates approved plans for closer co-operation between the CITES Secretariat and the two existing international agreements dealing with conservation of marine turtles in the Caribbean region: the Inter-American Convention for Protection and Conservation of Sea Turtles (IAC) and the Convention for the Protection and Development of the Marine Environment of the wider Caribbean region (Cartagena Convention) and its Protocol Concerning Specially Protected Areas and Wildlife (SPAW Protocol),

virtually every egg laid is collected for human consumption

marine turtles have utilised by humans

* TRAFFIC is grateful for Lufthansa’s support towards its CoP14 CITES-related conservation work.