Taking Off wildlife trafficking in the Latin America and Caribbean region

New research reveals how traffickers are robbing the world’s most wildlife-rich region of its natural wealth. Mexico, Brazil and Colombia see the highest number of wildlife trafficking instances in aviation according to the data, often to supply countries less commonly associated with illegal wildlife trade, including the Netherlands, Germany and the United States.

Taking Off: wildlife trafficking in the Latin America and Caribbean region

Washington, D.C. – Published today, Taking Off uses publicly available data from wildlife seizures in the air transport sector between 2010 and 2020 to provide the most comprehensive assessment of wildlife trafficking by air in the Latin America and Caribbean (LAC) region to date.

Released by the USAID Reducing Opportunities for Unlawful Transport of Endangered Species (ROUTES) Partnership, the study aims to inform the aviation industry within, or with connections to, LAC of how it can strengthen its defenses against wildlife trafficking. To this end, researchers at the Center for Advanced Defense Studies (C4ADS) used data from the C4ADS Air Seizure Database to examine what types of wildlife are being taken where, and the methods traffickers are employing to smuggle it past enforcement.

“The trends identified in this research can be leveraged by airports and airlines to disrupt trafficking attempts. For example, knowing that Brazil sees significant volumes of aquatic species smuggled to Germany and birds to the Netherlands can prompt increased vigilance along these routes,” explains Michelle Owen, ROUTES Lead. “Aviation personnel in Colombia may pay particular attention to air freight, understanding that this is where illegal wildlife is most often found in the country.”

Wildlife trafficking in LAC has been in dire need of attention. The region is home to more than 40% of the world’s biodiversity, but according to WWF, animal population sizes here have dropped by 94% in the last 50 years – the most significant fall registered in any part of the world, due to factors including habitat loss, disease and trade. And biodiversity protection isn’t the only cause for concern in the LAC region.

The particular vulnerability of the LAC region doesn’t just lie in its fantastic biodiversity, which makes it a prime target for wildlife criminals. It is also home turf to some of the world’s most sophisticated and violent trafficking networks, dealing in weapons, narcotics and human beings.

Henry Peyronnin, Analyst and one of the report’s authors at C4ADS"Several of these also have demonstrable links to global wildlife trafficking. Understanding and responding to the­se networks’ movements has the potential to protect not just wildlife but humans too.”

Though the brief focuses on the LAC region, the findings within are of global concern. Fifty-three countries were linked to wildlife trafficking through air transport within, to and from LAC countries between 2010 and 2020, with frequent shipping of its unique, endemic animals to meet demand in Europe, North America and Asia. 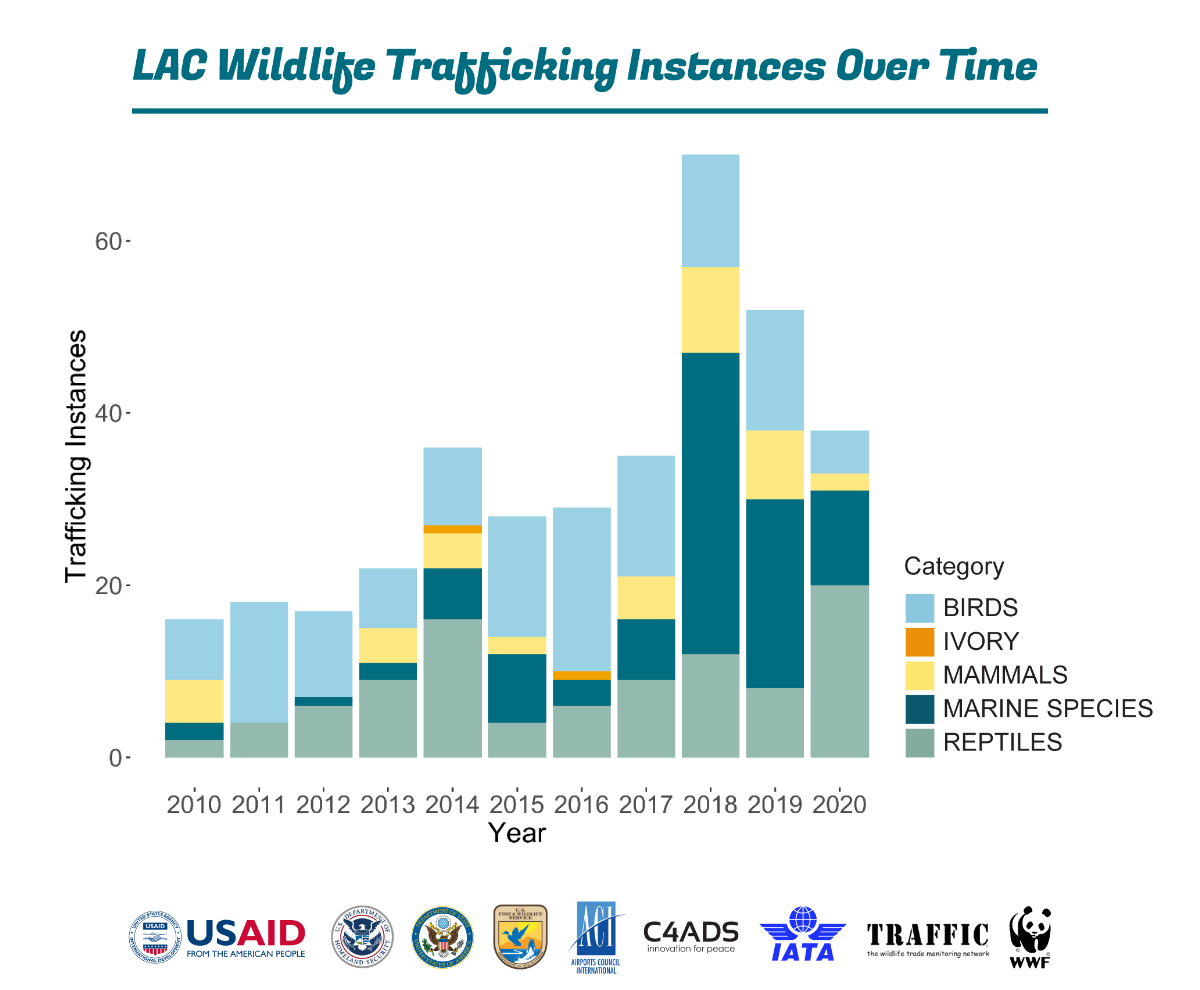 The most commonly trafficked animals were birds, primarily finches, which made up 33% of all LAC bird seizures in aviation from 2010 to 2020. A substantial proportion of birds were destined for the United States, shedding light on a lesser-known but detrimental demand for songbirds there. Songbird competitions, particularly in New York City, motivate much smuggling of finches from Georgetown in Guyana.

Intra-regional trafficking was also a frequent phenomenon, with many reptiles and birds sought after as exotic pets within the LAC. Whilst other countries primarily acted as exporters, Brazil stood out for the size of its domestic market, seeing the highest level of within-country trade. The study identified an emerging trend for aquatic species in Brazil, with 2019 seeing a sharp increase in trafficking of Zebra Pleco – sought after as a pet for their striking coloration – and a demand for the skin of the Pirarucu fish, used for leather.

Of further concern is the fact that 40% of known seizures in the LAC between 2010 and 2020 consisted of live animals (often destined for pets), which a previous report from C4ADS flagged as a risk for zoonotic disease spillover.

The ROUTES Partnership is increasing its engagement with the air transport industry in the LAC region through bespoke webinars, provision of counter-wildlife trafficking training materials in Spanish and Portuguese, and tailored guidance to aviation companies looking for support in this area.

found linked to wildlife trafficking by air in the region

had most instances of wildlife trafficking

were the most commonly seized animal

C4ADS is a nonprofit organisation dedicated to providing data-driven analysis and evidence-based reporting on global conflict and transnational security issues.