New analysis highlights persistent Tiger trafficking: more than 2 per week seized since turn of the century

Geneva, Switzerland, 21st August 2019—There has been no respite for the heavily hunted Tiger with an estimated average of over 120 individuals seized each year over the past 19 years, a new TRAFFIC analysis revealed today. 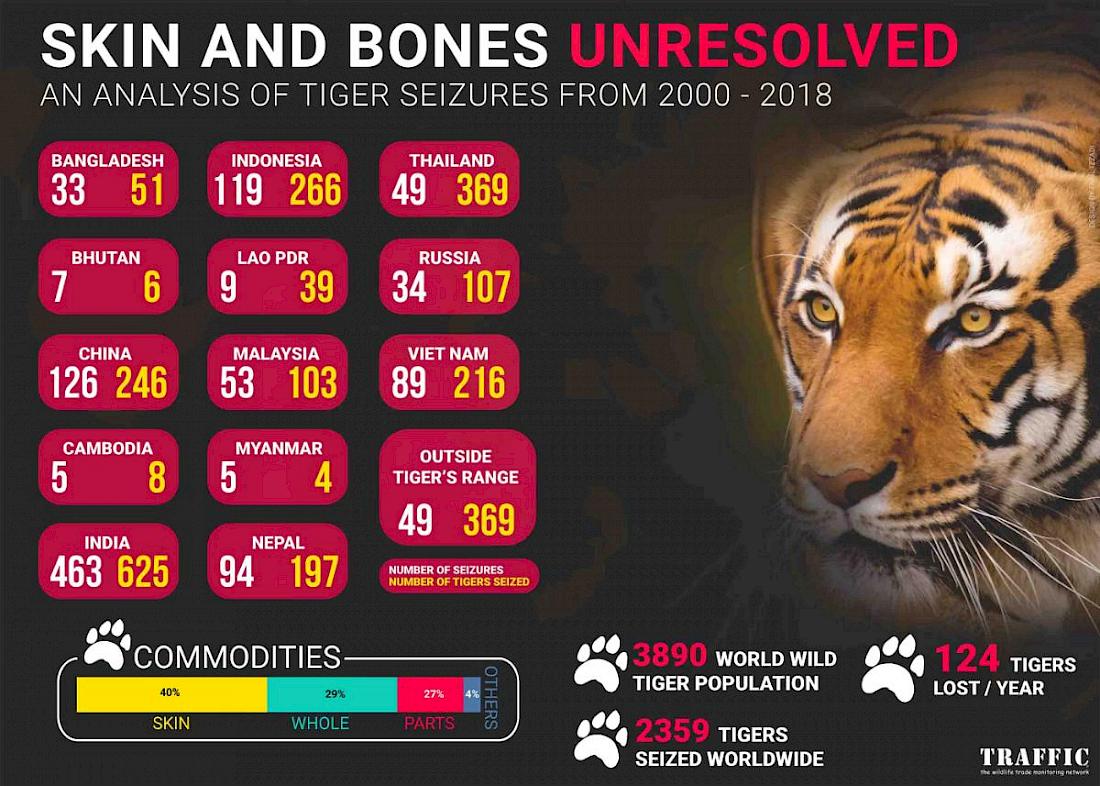 Overall, the analysis estimated that 2,359 Tigers were seized from 2000 to 2018 across 32 countries and territories globally, resulting from 1,142 seizure incidents. The vast majority, around 95% of these seizures were recorded in countries that are home to Tigers.

India, with the world’s largest wild Tiger population, remains the country with the highest overall number of seizures and the most Tigers seized, consistent with findings from previous years. It accounted for 40.5% of total incidents (463) and 26.5% of tigers seized (626).

Outside the Tiger’s range, a total of 56 seizures were recorded, of which Taiwan Province of China and Mexico reported the largest number of Tigers seized throughout the 19-year period: 39 and 13 Tigers from 7 and 13 seizure incidents respectively.

“Skin and Bones Unresolved: An Analysis of Tiger Seizures from 2000-2018, the fourth report in TRAFFIC’s series on tiger trade, reinforces that Tiger skins remain as the single most frequently seized tiger part—on average every year, almost 58 whole Tiger skin equivalents were seized.

We have done these analyses four times now and year on year, its more bad news for Tigers. The poaching and illegal trade in Tigers has been a decades-long unresolved problem that has piled the pressure on wild Tiger strongholds,” said Kanitha Krishnasamy, TRAFFIC’s Director for Southeast Asia and an author of the report.

“This pernicious trafficking—evidenced by the continuously high number of whole skins, whole animals—both dead and alive—and bones is testament to the ongoing demand for Tiger parts. The time for talking is over: words must be turned into action to prevent further Tiger loss.”

Analysis of the more recent years of the dataset turned up a few surprising findings including a four-fold increase in the yearly average seizure incidents in Indonesia between 2015-2018 and an almost-doubling of the numbers of Tigers involved as a result. Even now, Indonesia continues to see large Tiger parts seizures including one earlier this month of at least a dozen Tiger skins in an East Javan workshop that made traditional dance masks.[1]

The authors said a significant number of Tigers from captive sources were seized during this period and that it underpinned the recurrent threat regarding the leakage of captive Tigers into the illegal market.

The study found over half (58%) of the Tigers seized in Thailand and 30% in Viet Nam were identified as originating from captive breeding facilities, with the largest proportion coming from a single seizure of 187 Tigers in Thailand in 2016. Overall, a minimum of at least 366 tigers from known or suspected captive sources were seized over the assessed period.

“Seizures of Tigers from captive facilities continue and serve as a stark reminder that such facilities seriously undermine conservation efforts to safeguard this species and provide opportunities for laundering and other illegal activities,” said Ramacandra Wong, a Senior Crime Analyst with TRAFFIC in Southeast Asia.

And when looking at available information on the reported trafficking routes, from just 231 incidents, almost 90% of Viet Nam’s reported Tiger trafficking route implicated a supply of Tigers from Lao PDR. Given that Lao PDR has no viable wild Tiger population, the most plausible source of these Tigers was from captive populations, the study reported.

Just days ahead of World Tiger Day on 29th July 2019, Vietnamese authorities seized seven frozen tiger carcasses from a vehicle in Ha Noi from a suspect believed to have smuggled tigers from Lao PDR for years.

The study was launched to coincide with discussions around the trade in Tigers and other big cat species taking place between world governments meeting in Geneva for the 18th meeting of the Conference of the Parties to the Convention in International Trade in Endangered Species of Wild Fauna and Flora (CITES).

The authors call for the full and effective implementation of CITES Resolution Conf. 12.5 (Rev. CoP17) on Asian big cats (ABCs) and the associated CoP Decisions which recommend a slew of actions covering improved legislation, enforcement, record keeping and actions to prevent Tiger parts and derivatives from captive breeding facilities from entering the illegal trade chain.

Currently there are around 3,900 wild Tigers left in the wild.

A matter of attitude: The consumption of wild animal products in Ha Noi, Viet Nam