Hornbills losing their heads to online trade in Thailand

Geneva, Switzerland, 27th August 2019—A new study released today to coincide with the 18th Conference to the Parties to the Convention on International Trade in Endangered Species of Wild Fauna and Flora (CITES CoP18) finds hundreds of Helmeted and other hornbill parts and products offered for sale on Thai social media. 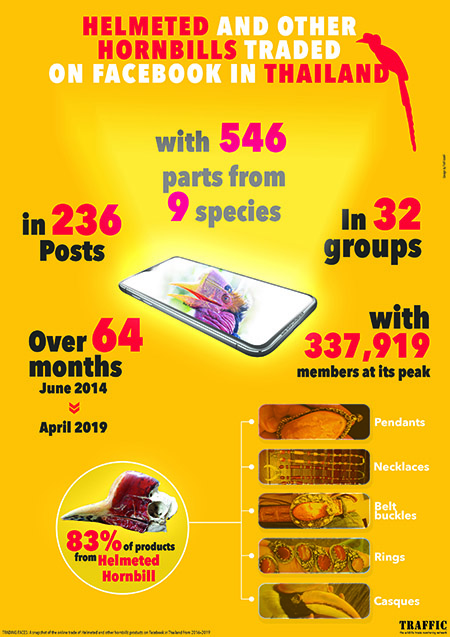 The six-month online survey found a minimum of 236 online posts offering a minimum of 546 hornbill parts and products in 32 of the 40 groups surveyed on Facebook. These were posted over a period of 64 months, spanning June 2014 to April 2019.

“This is the first systematic study providing evidence that the trade in Helmeted Hornbill parts and products exists in Thailand—a range state and outside previously documented open trade in China and Lao PDR,” said Maethinee Phassaraudomsak, TRAFFIC’s lead author of the report.

Helmeted Hornbill Rhinoplax vigil parts and products constituted 452 (83%) of all hornbill commodities recorded. This finding was of particular concern  because trade in this species has risen over the past decade, driven by demand for its solid bill casque, carved and used as an alternative to elephant ivory, particularly in China and increasingly in other Asian markets.

Populations of the rare Helmeted Hornbill, whose charismatic call epitomises the sounds of rainforests across Southeast Asia, have declined in recent years as a result of illegal hunting and trafficking. All hornbill species are listed in CITES Appendix I or II, prohibiting or regulating international trade while the Helmeted Hornbill was recently uplisted on the IUCN Redlist of threatened species to Critically Endangered—facing an extremely high risk of extinction in the wild.

Although online research commenced in October 2018, TRAFFIC researchers observed that posts offering Helmeted Hornbills went as far back as 2014, with peaks recorded in 2016 and 2018, ranging from 162 to 171 individual Helmeted Hornbill products offered for sale.

Seizure data indicate that the poaching hotspots for the species are in Indonesia’s Kalimantan and Sumatra, but there has been little information on poaching and trade of Helmeted Hornbills in Thailand.

It could not be determined if the Helmeted Hornbill casques were sourced from within Thailand or from other range states, although in one instance, a post claimed that the advertised casque piece was from Malaysia.

The study also found 94 whole heads of eight other hornbill species—all native to Thailand and prohibited from hunting and trade by Thai legislation—made up the rest of the hornbill commodities recorded in the survey.

Although Thai government authorities have successfully carried out enforcement action in at least five known online cases involving hornbills, trading activity is persistent. Cursory checks on the 32 target groups in August 2019 showed that Helmeted Hornbill products were still being offered.

However, a number of pages and posts have since been deleted. This could be due to effort taken by Facebook and law enforcement agencies. But continued monitoring and investigations in these and other groups would be important to ascertain the status of the online trade in Helmeted and other hornbills in Thailand.

Taking down posts serves to reduce opportunities for buyers to make a purchase. But our years of monitoring online trade clearly show that when posts are taken down, trade activity simply resumes after a brief lull when traders lay low to avoid detection

Kanitha Krishnasamy, TRAFFIC’s Director for Southeast Asia and co-author of the report.

“We fully recognise that tackling the illegal wildlife trade online comes with its own set of challenges, but key to any success is to pursue investigations and collaboration with all the right partners,” said Krishnasamy.

As part of its continued engagement with the Coalition to End Wildlife Trafficking Online, Facebook introduced a policy in April 2019 to ban the trade of all live animals on their platform from non-verified physical businesses, as well as all endangered species and their products across the platform including Helmeted Hornbill.

TRAFFIC urges Thai authorities and Facebook continue their vigilance and work closely to develop joint strategies to track and tackle the issue of online trafficking in one of Southeast Asia’s emblematic bird species. Social media users can do their part too and report suspicious posts to social media sites reporting tools or law enforcement.

hornbill parts and products were found during the survey

of eight other hornbill species all native to Thailand

Relevant screenshots and images can be downloaded here.

In the Market for Extinction: An inventory of Jakarta’s bird markets