Singapore, 1st February 2008— TRAFFIC Southeast Asia and Singapore Zoo today launched a turtle guidebook titled An Identification Guide to the Tortoises and Freshwater Turtles of Brunei Darussalam, Indonesia, Malaysia, Papua New Guinea, Philippines, Singapore and Timor Leste. The guidebook, will meet one of the most pressing needs - the correct identification of species commonly traded (both legally and illegally) in the region, by enforcement officers and conservationists. 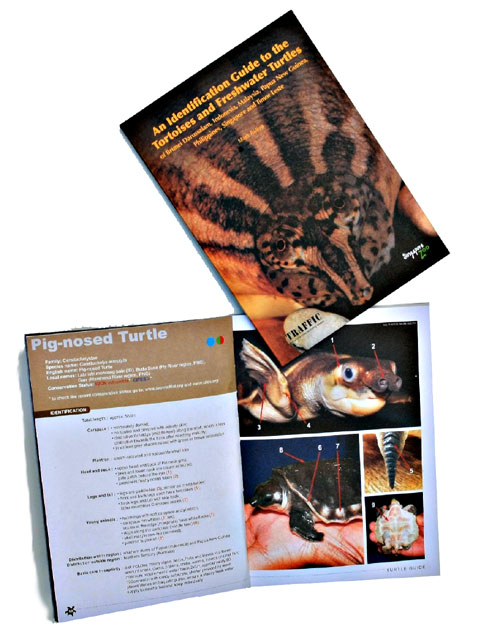 “Singapore Zoo is pleased to collaborate with Dr Mark Auliya, Scientific Officer of TRAFFIC Southeast Asia and author of the book, for the production of this essential identification material. In light of the phenomenal rise in illegal turtle and tortoise poaching incidences in Southeast Asia, we hope this guidebook will serve as a reference for all, in identifying threatened turtle species and will play a role in protecting and conserving them,” said Ms Fanny Lai, Group CEO, Wildlife Reserves Singapore.

“To monitor the trade in tortoises and freshwater turtles, a basic requirement is that enforcement officers need to be able to identify which species they are dealing with,” said Dr Mark Auliya, Scientific Officer, TRAFFIC Southeast Asia. Dr Auliya added, “The destructive scale and impact of the turtle trade is driving some species to extinction and for most species, the situation is critical.”

The new guide will allow on-the-spot identification of tortoise and freshwater turtle species in trade. It also gives information on each species regulatory and conservation status and summarises all information available on the recognised species and populations of the target region, whilst at the same time minimising the use of scientific language to provide a user-friendly resource for enforcement officers.

“The identification guide covers the species commonly traded through Singapore. AVA finds this guide user-friendly as it pinpoints the characteristics of each species. AVA will use the guide to teach new officers on how to identify turtles and tortoises," said a spokesman from the AVA.

To further boost the protection and conservation of threatened tortoises and turtles, the Singapore Zoo works closely with AVA, in caring for confiscated animals with the professional in-house expertise and husbandry resources available.

In addition, the Zoo also houses threatened turtles donated by the public at its Rescued Animal Centre, which are eventually transferred to habitats in the Zoo and Night Safari. The Zoo also identifies suitable homes in zoos overseas to which these tortoises and turtles can be sent for captive breeding and animal exchange. A shipment of 15 star tortoises destined for Lisbon Zoo, Portugal, is slated to leave end February 2008.

The guidebook, available in five languages: English, Chinese, Bahasa Melayu, Bahasa Indonesia and Filipino will be made available to enforcement officers in the region free of charge.