The suspects were detained for failing to display valid documents for possession of all the hornbills. The men are believed to be the transporters, and investigations are ongoing on the other parties involved.

All hornbill species intercepted in this seizure are native to the country. They are protected from any hunting or trade under the Wildlife Conservation Act 2010 and listed on CITES Appendices. The confiscated animals include an immature Helmeted Hornbill Rhinoplax vigil, a Critically Endangered and CITES Appendix I species already at risk of extinction from hunting primarily for its casque.

We have not had a case like this in recent times. The number of hornbills targeted for the international market is a very concerning signal. Our hornbill species are precious to us, and we are treating this case with the urgency it needs.”

“Our congratulations to PERHILITAN. Their swift action prevented these birds from entering the black market,” said Kanitha Krishnasamy, Director for TRAFFIC in Southeast Asia. “Past trade activities mainly involved hornbill parts or online sales of live birds to local collectors, but this case confirmed suspicions that live hornbills are being extracted from Malaysia for international trade. We hope investigations into the suspects paves a way to identify the people behind the sinister operation.” 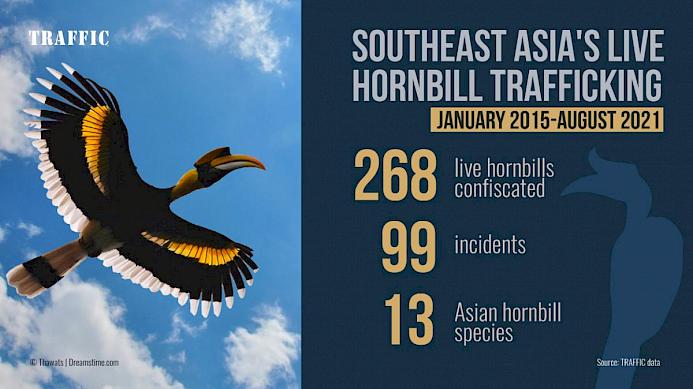 However, this is just the tip of the iceberg of the illegal live hornbill trade in Southeast Asia. The recent case is the 99th known incident of live hornbill confiscation in Southeast Asia since 2015, bringing it to a minimum of 268 live birds seized. These involved 13 Asian hornbill species confiscated from illegal trade and trafficking in the region.

The highest number of hornbills were confiscated in Indonesia (99 birds), followed by Thailand (85 birds) and Viet Nam (37 birds). These animals would have been destined for the pet trade and private collections.

In Malaysia, there have been four other enforcement incidents involving live hornbills seized from premises involving the Black Hornbill Anthracoceros malayanus and Oriental Pied Hornbill. All incidents took place in 2019 and 2021.

“At a  glance, these numbers may not seem very high,” said Serene Chng, Programme Officer for TRAFFIC in Southeast Asia and Trade co-lead for the Helmeted Hornbill Working Group. “But, when you consider  the facts - most hornbill species reproduce slowly, only producing one chick a year at most, with many species  naturally uncommon in the wild - every removal from the wild, especially the chicks, is a threat to their survival.”

Seizures like this one seen at KLIA illustrate the real threat of international demand on these species and the vital role stakeholders like PERIHILITAN have in preventing this illegal trade.