Nairobi, Kenya & Cambridge, UK, 13th May 2010—A UN report launched this week demonstrates how the natural systems that support economies, lives and livelihoods across the planet are at risk of rapid degradation and collapse without swift, effective conservation action to manage them sustainably. 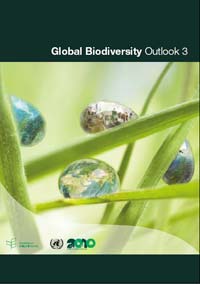 The third edition of Global Biodiversity Outlook (GBO-3), produced by the Convention on Biological Diversity (CBD) confirms the world has failed to meet its target to achieve a significant reduction in the rate of biodiversity loss by 2010.

The Outlook warns that massive further loss of biodiversity is becoming increasingly likely, and with it, a severe reduction of many essential services to human societies as several “tipping points” are approached, in which ecosystems shift to alternative, less productive states from which it may be difficult or impossible to recover.

The tipping points include the dieback of large areas of the Amazon forest caused by a combination of climate change, deforestation and fires, with consequences for the global climate, regional rainfall and widespread species extinctions; the buildup of nutrients in freshwater lakes leading to oxygen depletion and the widespread death of fishes; and the multiple collapse of coral reef ecosystems due to a combination of ocean acidification and warmer water and threatening the livelihoods of hundreds of millions of people.

GBO-3 uses multiple lines of evidence to demonstrate that the target set by world governments in 2002—“to achieve by 2010 a significant reduction of the current rate of biodiversity loss at the global, regional and national level as a contribution to poverty alleviation and to the benefit of all life on Earth,” has not been met.

Based on a special analysis of biodiversity indicators carried out by a panel of scientists, as well as peer-reviewed scientific literature and reports from national governments to the CBD, the study found that none of the 21 subsidiary targets accompanying the overall 2010 biodiversity target can be said definitively to have been achieved globally, although some have been partially or locally achieved. Ten of 15 headline indicators developed by the CBD show trends unfavorable for biodiversity.

TRAFFIC and the IUCN–SSC's Medicinal Plant Specialist group developed indicators to monitor trends in the status of wild species used for food and medicine. These showed that birds and mammals used for food and medicine are generally more threatened than those that are not. This may be due to over-exploitation or for other reasons such as habitat loss, or a combination of factors.

“Regardless of the causes, the diminishing availability of wildlife resources threatens the health and well-being of the people who depend on them directly for food and medicine and on their wild harvest as a source of income,” said Thomasina Oldfield, Research and Analysis Programme Leader for TRAFFIC.

The conservation status of plants is less well known, but globally some 80 percent of people in developing countries rely on traditional medicines, the majority of which are plant-derived.

According to Danna Leaman, Chair of the IUCN-SSC Medicinal Plant Specialist Group: “The medicinal plant species assessed to date appear to face a higher risk of extinction in those parts of the world where people are most dependent upon them for health care and income from wild collection—namely Africa, Asia, the Pacific and South America.”

The Outlook was launched in Nairobi, Kenya, for consideration at SBSTTA, the Subsidiary Body on Scientific, Technical and Technological Advice, of the CBD at its 14th meeting and at the subsequent Working Group on Review of Implementation of the CBD (WGRI).

GBO-3 will further be a key input into discussions by world leaders and heads of state at the United Nations General Assembly on 22 September.  Its conclusions will also be central to the negotiations by world governments at the Nagoya Biodiversity Summit, the CBD's 10th Conference of the Parties in October 2010.