Paulinus interviewed at the launch of AFRICA-TWIX

Cambridge, UK, 20th December 2019—BirdLife and TRAFFIC colleagues are mourning the loss of their colleague and friend, Paulinus Ngeh, who passed away yesterday in the General Hospital of Yaoundé following a battle with cancer. 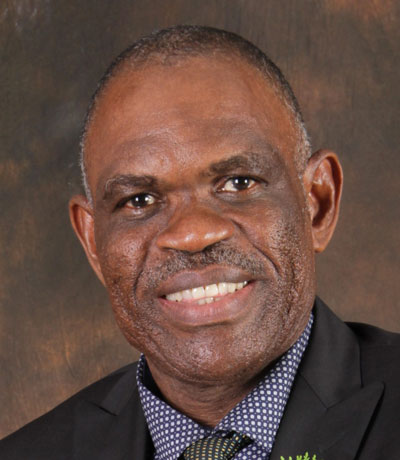 Originally a forester by training with a PhD in Forest Ecology, Paulinus worked in the conservation sector for almost three decades. He joined BirdLife in 2000 as the Regional Co-ordinator for West Africa based in Ghana, a post he led with great passion and vision overseeing the development and implementation of BirdLife’s Conservation and Natural Resource Management Programme and co-ordinating the work of BirdLife Partner activities in the 12 countries in the West Africa sub-region. In his early days he spent many hours in the field helping with bird survey work and talking to local communities about the unique birds and other biodiversity found across the region, including special places like the Bamenda Highlands in Cameroon.

In April 2014 Paulinus joined TRAFFIC, taking over the role as the organisation’s first ‘in situ’ Director for Central Africa, based in his native Cameroon in the Yaoundé office, whose doors had opened only some six years earlier. There he helped steer TRAFFIC’s work in the region, contributing towards the organisation’s global programme of work and in building and strengthening partnerships with governments and conservation organisations and individuals within the region. In particular, he supported TRAFFIC’s work enhancing governance of the region’s timber trade, promoting the sustainable use of forest products in Central Africa. He also guided TRAFFIC’s technical support to help countries in implementing their National Ivory Action Plans (NIAPs) under CITES,1 through which Paulinus led TRAFFIC’s engagement with the Congo Basin Forest Partnership (CBFP). In August 2014, TRAFFIC was recognised as CFBP’s Partner of the Month. Paulinus also oversaw the development of ties between timber suppliers in Central Africa and buyers in Europe and East Asia, helping establish firm commitments towards ensuring the legality and sustainability of supplies and sound forestry management practices.

It was Paulinus who laid the inter-governmental foundations for the development of AFRICA-TWIX,2 a platform for enforcement agencies within the Central Africa region to exchange information on wildlife crime cases securely. AFRICA-TWIX was launched in early 2016. Its role is expanding in the region, with Rwanda becoming the latest country to join. When Chad signed up to it in January 2019, it was just months after Paulinus reached Cameroon’s national retirement age, in December 2018. Although the original TWIX concept was developed in Europe, Paulinus and colleagues pioneered its introduction into Africa. A measure of its success in that continent is that just three years after the system was introduced into Central Africa, SADC-TWIX became operational across southern Africa countries. TWIXes in Africa will be an enduring legacy to Paulinus’s work in the region.

He will be remembered for his dedication to conservation, particularly in Central and West Africa, and sadly missed by all his family, friends and former colleagues.