Large haul of “Tiger” and other wildlife parts in Malaysia

Kuala Lumpur, Malaysia, September 2015—Authorities in Malaysia have busted a syndicate that claimed to be selling tiger and other wildlife parts and arrested three Indian nationals.

Last week, authorities seized five skins, 471 claws, 25 canines, 309 fragments of skin and 17 paws, all claimed by the syndicate to be tiger parts.

The Department of Wildlife and National Parks’ (Perhilitan) Wildlife Crime Unit also found dozens of unidentified wildlife skin, 22 parts of various other animals as well as 120 and 242 bangles said to contain elephant hair. All items will be subjected to DNA forensics testing.

Two men and a woman from India have been remanded for four days and are being investigated under Section 68 and 87 of the Wildlife Conservation Act 2010 which relate to possession and claims to contain totally protected species.

Following a tip off, the Department of Wildlife and National Parks’ (Perhilitan) Wildlife Crime Unit investigated the suspects and organized a bust. The traders and suppliers of the gang were arrested on 26th August in the heart of Kuala Lumpur. The investigation and raid was part of Perhilitan’s Ops Geng Rajja.

Abdul Kadir told press a similar case was reported in June 2013 and authorities were looking into possible links between the syndicates involved in both cases. Authorities also believe that the wildlife parts were sourced from India, making this an international operation. 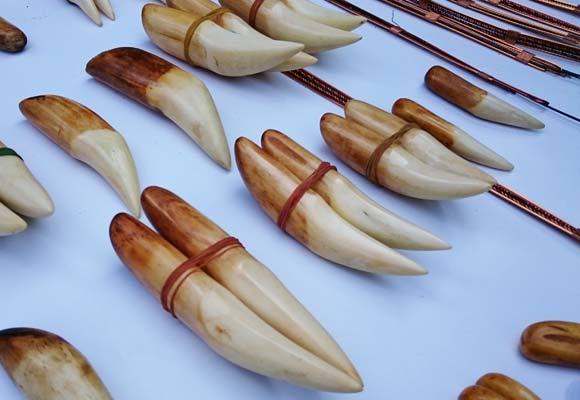 He also said that the Department would consider alternative charges under the International Trade in Endangered Species Act 2008, if forensic results point to non-native species.

“This case is a true reflection of how law enforcement and investigations can crack down on trafficking,’’ said Kanitha Krishnasamy, TRAFFIC Programme Manager in Southeast Asia.

“TRAFFIC particularly welcomes the Department’s achievement in helping shut down this syndicate’s operations. Very often items for sale purporting to be Tiger parts are not genuine, but regardless of their authenticity, those purchasing such items help to fuel the demand for endangered species.”

Abdul Kadir said: “The fact that groups like this keep substantial stocks and operate in the open means that people are buying tiger parts despite knowing that it is against the law. We urge the public to stop creating the demand that drives poaching and illegal trade.”

Viet Nam under scrutiny after remarkable sequence of ivory seizures