Petaling Jaya, Malaysia, 18th August 2019—A new analysis of the trade in White-rumped Shamas in Southeast Asia over the past decade finds incredible numbers of the birds seized and recorded in markets, leading to calls for greater protection and regulation for the popular songbird. 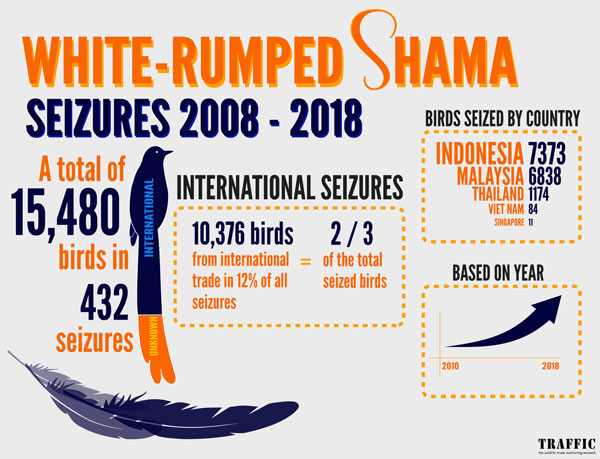 The keeping of songbirds as pets and for participation in singing competitions is a tradition in the Asian region. This has led to a decline in many species in the wild, such as the White-rumped Shama—one of more than two dozen species that has disappeared across much of its former domestic range in Southeast Asia largely because of excessive levels of trapping for the cagebird trade.

“The ongoing demand for songbirds in Southeast Asia and local population depletions has led to birds being sourced from further afield: this is no longer just a domestic issue, it has become an international issue of concern,” said Kanitha Krishnasamy, Director for TRAFFIC in Southeast Asia.

This week, the international trade in songbirds will be on the agenda at the Convention on International Trade Endangered Species of Wild Fauna and Flora (CITES), to which more than 180 governments are signatories worldwide.

This could form the basis for measures eventually being put in place to protect songbird species like the White-rumped Shama from excessive levels of international trade.

“Currently the White-rumped Shama isn’t protected by international regulations, so the discussions this week at CITES are vital for drawing attention the plight of an increasing number of songbird species, which may eventually result in them receiving better regulation under the Convention,” said Krishnasamy.

Indonesia was the most frequently recorded destination for international shipments with trade routes running mainly from and through Malaysia. Thailand, Viet Nam and Singapore were also listed as destinations.

The single biggest cross-border seizure involved 4,280 shamas smuggled from Malaysia to Indonesia by boat in July 2017. So far in 2019 alone, at least 1,627 more shamas have been seized in four incidents in Indonesia and Singapore.

The study’s findings also pointed to high local demand in Indonesia, in places like Java, Bali, Lombok and Kalimantan in Indonesia and shipments between the country’s many islands, reported the study by researchers from TRAFFIC, Monitor, YPI, Oxford Wildlife Trade Research Group, WWF Malaysia, Universitas Gadjah Mada and PERHILITAN.

Given that trade in wild-caught species is permitted through a licensing system in countries where seizures occurred, it is suspected that a sizeable portion of seized specimens were caught from the wild illegally, which led to the law enforcement action.

“The numerous confiscations we have made this past decade is a testament to this worrying problem. We seem to be losing our native birds, despite allowing licensed trade. The Department is doing its best to dismantle illegal trade including enhancing border checks and ensuring better efforts to regulate domestic and international trade by imposing higher penalties under Act 716 and imposing quotas at state level to curb overhunting of the species,” said Dato’ Abdul Kadir bin Abu Hashim, Director-General of the Department of Wildlife and National Parks, Peninsular Malaysia (PERHILITAN).

The latest study’s authors call for the species to be listed in CITES Appendix III by relevant range states, a decision that could be affected immediately. This would help with monitoring the current levels of international trade.*

“The large numbers of shamas in international trade are not wholly surprising. As populations dwindle where demand is high, supplies will have to be sourced from surrounding countries. This phenomenon can have lasting effects on regional or even global populations and has been observed for other animal species,” said co-author and Monitor Programme Officer, Boyd Leupen.

The study also found 8,271 shamas recorded for sale in local bird markets, from combined data from surveys across Indonesia, Malaysia, Singapore, Thailand and Viet Nam, between 2007 and 2018. Surveys online between 2016-2018 in six internet trade studies in Indonesia, Malaysia and Thailand found 917 individuals for sale.

The impact of domestic and international trade in South-East Asia’s songbird populations, like the White-rumped Shama, could be far more devastating than thought. It cries out for closer monitoring and rapid action from all the key parties

TRAFFIC thanks Wildlife Reserves Singapore and an anonymous donor for generously funding these surveys and for its continued support of TRAFFIC in their bird trade work.

Trade in White-rumped Shamas Kittacincla malabarica demands strong national and international responses was published in Forktail, the journal of the Oriental Bird Club.

* The Convention on International Trade in Endangered Species of Wild Fauna and Flora (CITES), lists wildlife in three Appendices, each with different levels of protection from over-exploitation. International trade in species listed in Appendix III is allowed only on presentation of the appropriate permits or certificates. The country listing the species does so to seek co-operation of other countries to prevent unsustainable or illegal exploitation of the species concerned.