New Delhi: Traffickers are exploiting the growth of the aviation sector to move illegal wildlife products across India and its international borders. Organisations have joined forces to develop a suite of tools to arm enforcement officials with the knowledge and skills to combat this crime that fuels declines in many Indian and international species.

TRAFFIC’s HIGH FLYING: Insight into wildlife trafficking through India's airports analysis found the trafficking of over 70,000 native and exotic wild animals, including their body parts or derivatives (weighing around 4000kg) in 140 wildlife seizure incidents at 18 Indian airports between 2011-2020. Forty-six per cent of seizures were reptiles, including the Vulnerable[1] Indian Star Tortoise, in which traffickers clearly disregard the international rules[2] prohibiting its trade to protect the species.

TRAFFIC’s study of wildlife seizures at Indian airports between 2011-2020 reinstates the need to strengthen enforcement efforts to curb the exploitation of the airline sector for conducting illegal wildlife trade.” 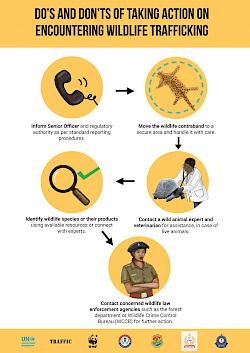 "We thank UNEP and our partners for their support in launching a first of its kind project in India focused on working with enforcement officials to detect and deter wildlife trafficking through airports”, adds Dr Badola.

Developed by TRAFFIC and UNEP (United Nations Environment Programme) in collaboration with WCCB (Wildlife Crime Control Bureau) and WWF-India, the capacity-building tools are accessible via a new online knowledge hub (www.IWTKnowledgeHub.in) and include:

“Illegal wildlife trade through airports is a major conservation threat magnified by the growth in the airline sector. It is important for enforcement agencies to prioritise bringing an end to wildlife trafficking. We are pleased to have partnered with TRAFFIC, WWF-India, Customs, CISF and WCCB to design and implement a dedicated programme that will help strengthen the detection of illegal wildlife trade at airports,” said Mr Atul Bagai, Head of the United Nations Environment Programme Country Office in India.

Ms Tilotama Varma, Additional Director, WCCB, said, “Airports have emerged as a popular mode for transporting wildlife contrabands due to the shorter travel time and extensive reach. Traffickers smuggle wildlife and their derivatives through checked luggage and personal baggage, by concealment of wildlife contraband within passenger clothing, footwear, and other wearables and through the wrong declaration of protected species, all of which makes detection cumbersome for enforcement agencies. The newly developed resources under the project will prove useful for bridging such gaps”.

The new awareness and capacity building tools developed under the 'Deterring and Disrupting wildlife trafficking in the air transport sector in India' project, were launched at an event on 25 March 2022 at NACIN (National Academy of Customs, Indirect Taxes & Narcotics), Faridabad.

To utilise the coming together of agencies, the launch event also included a Training of Trainers where over 40 officials from various NACIN academies across India, Customs, CISF (Central Industrial Security Force), WCCB, and partner organisations attended the training and also joined online.

Mr Yogendra Garg, Additional Director General, NACIN adds, “Customs need to continuously acquire new skills to keep pace with the latest trends in smuggling. Training tools and resources are thus crucial for upscaling their skills to detect crime. Also, there is a dire need to create awareness about emerging issues like wildlife crime from time to time. We at NACIN  are really glad that a dedicated effort for curbing wildlife trafficking through airports has been initiated through this project."

Mr Ravi Singh, Secretary-General & CEO, WWF-India said, “Wildlife needs our support more than ever due to the ever-increasing threats due to human interventions, climate change and illegal wildlife trade. The new project engages with nodal agencies at airports and helps to increase the awareness and prevention of illegal wildlife trade”.

[1] The Indian Star Tortoise is listed as Vulnerable on the IUCN Red List.

[2] The Indian Star Tortoise is listed in Appendix I of the Convention on International Trade in Endangered Species of Wild Fauna and Flora (CITES), prohibiting the commercial trade in wild-caught specimens.