Beijing, China, 8th June 2012—15 of the leading e-commerce sellers operating in China, including Alibaba, Taobao, and Tencent, have signed a declaration stating they have a zero-tolerance policy towards their services being used to conduct illegal wildlife trading.

The statement says sellers and buyers must comply with all aspects of China’s Wild Animal Protection Law and regulations under CITES (the Convention on International Trade in Endangered Species of Wild Fauna and Flora) governing the trade in wildlife goods.

The declaration was issued following a workshop on controlling online illegal wildlife trade organized by the National Forest Police Bureau of the State Forestry Administration (SFA) in collaboration with TRAFFIC earlier this month.

Although wildlife law enforcement efforts in China have led to gains in policing physical markets for wildlife, the availability of illegal wildlife goods online has been gaining ground, as evidenced by the booming popularity of the internet and the burgeoning number of websites where ‘high profile’ animal species or parts, such as elephants, rhinoceroses, tiger and marine turtles, are illegally offered for sale.

Mr Zhang Libao, director of the Wildlife Crime Division of the National Forest Police, speaking at this month’s workshop advised participants that websites providing a platform for illegal wildlife trading are liable to punishment according to Article 22 of the Wild Animal Protection Law and Article 341 of the Criminal Law. He also said Forest Police would conduct sustained action against wildlife crime, particularly online trade in tiger bone, rhino horn and ivory.

Mr Wang Weisheng, a Division Chief of the Wildlife Conservation Department of SFA, told participants: “All commercial trade in tiger bone and rhino horn, in any form, has been totally prohibited since 1993. Ivory trade is allowed only in 136 accredited physical shops, so all online trade in ivory products is illegal and thus prohibited.”

He urged e-commerce companies to screen all information relating to these three species in particular, to keep scrutinizing their sites for evidence of illegal wildlife trade as a priority and to collaborate with enforcement agencies to deter online wildlife crime.

Ms Xu Ling, TRAFFIC’s Senior Programme Officer in China, spoke about the dynamics of illegal online wildlife trade and analysed the key difficulties in tackling it. She told website representatives about various code words and hidden messages used by those trafficking wildlife products to hide their tracks online.

“Those operating e-commerce websites and associated online exchanges should make greater efforts to delete all suspect information, provide information on wildlife trade regulations to potential online shoppers, and provide a way for the public to report suspected illegal or fraudulent trade to servers and authorities,” said Ms Xu Ling.

Alibaba.com, the best known B2B e-commerce website in China, has taken a lead in combating illegal online wildlife trade by effectively screening information on all protected animals (and their derivatives) listed in the Wild Animal Protection Law and CITES.

During the meeting, Mr Draper Denial, a representative of Alibaba International, spoke about the company’s experience in popularizing and implementing national and international wildlife protection laws. In particular, he spoke of the following measures undertaken to deter illegal online wildlife trade on Alibaba and Taobao: announcement of a list of species banned from sale; popularization of wildlife conservation knowledge for staff and users; effective filtering using key words; regular double-checking of online material; and establishment of a reporting and quick response system supported by volunteers and non-governmental organizations.

Representatives from two antique collection websites noted their companies would be strictly complying with relevant laws and regulations, taking measures to delete illegal information, and advising all their users to take environment and biodiversity matters into serious consideration.

The latest meeting is part of a longer-term campaign led by TRAFFIC and WWF to encourage e-commerce websites to commit to not selling illegal wildlife products, with the aim to reduce both availability and demand for such contraband.

According to Dr Shi Jianbin, Head of TRAFFIC’s China Programme: “TRAFFIC is co-operating with online providers and wildlife enforcement authorities to heighten awareness among potential buyers and sellers about illegal online wildlife trade.

“Results of TRAFFIC’s monitoring of suspected online illegal wildlife trade will be passed on to relevant wildlife enforcement authorities for further investigation, as well as to e-commerce companies to help them in improving their strategies to prevent illegal trade.” 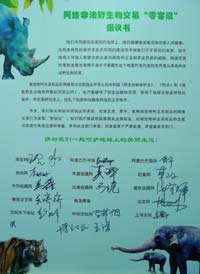 The declaration roughly translates as: We all live on the same planet, and a healthy environment is good for you and your family. Conserving biodiversity and maintaining a healthy environment are important for future generations. However, through the actions of people, increasingly rare wildlife species are suffering because of illegal trade. The rapid development of the internet has taken illegal wildlife trade into the virtual world. The illegal online trade in endangered species violates China's Wild Animal Protection Law and Criminal Law, as well as CITES, and seriously damages natural resources and negatively impacts on bio-diversity conservation. Furthermore, it also interrupts the normal and legal operation of auction and related websites. Today, we all state our promise that we will adopt zero-tolerance towards illegal online trade in tiger, rhino and elephant products. We will strictly comply with relevant laws and regulations through effectively filtering and screening illegal trade information in endangered species, actively reporting this information to enforcement agencies, and dealing seriously with illegal users. Please join us in protecting earth's beautiful creatures.