2013 worst ever for rhino poaching in South Africa

South Africa, 17th January 2014—The South African Department of Environmental Affairs revealed official figures today that 1004 rhinos were illegally killed during 2013 in South Africa, the equivalent of nearly three animals a day, making it the worst year ever on record for rhino poaching in the country. 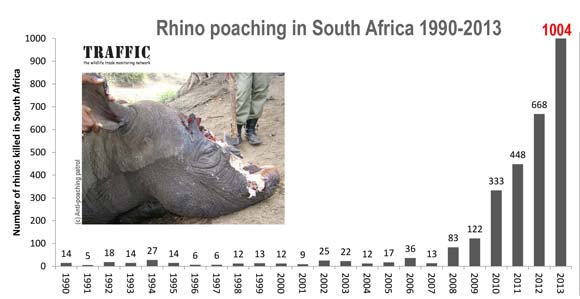 The figure is more than 1.5 times the official figure of 668 rhinos killed for their horns in 2012 and brings South Africa’s White Rhino population ever closer to the tipping point when deaths will outnumber births and the population will go into serious decline.*

Rhino horns are smuggled by organised transnational criminal networks to the main consumer markets in Viet Nam and China, where they are primarily used as a status symbol and health tonic. There is evidence of links between the criminal gangs masterminding the trafficking and other forms of organized crime, including the trafficking of people, drugs and weapons.

Mozambique, which neighbours South Africa, is widely seen as both a transit point for rhino horn smuggling activities and an operational base for poachers who cross the border to kill rhinos.

“South Africa and Mozambique must decisively up their game if they hope to stop this blatant robbery of southern Africa’s natural heritage,” said Tom Milliken, TRAFFIC’s rhino expert.

“2014 must mark the turning point where the world, collectively says ‘enough is enough’ and brings these criminal networks down.

“Rhino horn trafficking and consumption are not simply environmental issues, they represent threats to the very fabric of society.”

In March 2013, Parties meeting at the Convention on International Trade in Endangered Species of Wild Flora and Fauna (CITES) singled out certain countries heavily implicated in rhino trade crime to take action to address the ongoing crisis.

By the end of January 2014, the Vietnamese government must report to CITES on their progress in making seizures, arrests, prosecutions and convictions for rhino horn trafficking and use offences, as well as implementation of a robust tracking system for preventing imported rhino horn trophies from going into illegal trade. The country has also been instructed to develop and implement measures to reduce demand for rhino horn.

Similarly, Mozambique, a transit point for horn exiting Africa, must show the enactment and implementation of legislation with deterrent penalties to combat wildlife crime and stop the killing of rhinos and trafficking of rhino horn effectively.  Right now, rhino crime in Mozambique remains only a misdemeanour.

In late December 2012, South Africa signed a Memorandum of Understanding (MoU) with Viet Nam on tackling wildlife trafficking between the two nations and later developed a joint Rhino Action Plan. South Africa signed a similar MoU with China in 2013 and is developing others with Mozambique, Thailand, Laos, Cambodia and Hong Kong.

“The world’s rhinos are facing a genuine crisis and high level agreements and statements have to translate into meaningful conservation action, both in rhino range States and in key consumer countries such as Viet Nam and China,” said Dr Naomi Doak, Co-ordinator of TRAFFIC’s Greater Mekong Programme in Viet Nam.

“We are still waiting to see the rhetoric result in significant arrests and prosecutions of those orchestrating the rhino horn trafficking.

“We also urgently need to see a reduction in demand for horn in Viet Nam, the introduction of a system for tracing hunting trophies in the country, and strong sentences imposed on those convicted of rhino horn trafficking.”

On 12th and 13th February 2014, the London Conference on Illegal Wildlife Trade will seek commitments from key priority governments to combat the growing global threat posed by illegal wildlife trade. Heads of State and Foreign Ministers from around 50 countries, including those at the centres of the current rhino and elephant poaching crises are anticipated to attend this high level summit convened by HRH Prince Charles and UK Prime Minister David Cameron.

The conference will produce a declaration of political commitment to ensure a co-ordinated global response as well as necessary resources to turn the tide on illegal wildlife trade through improving law enforcement and the role of the criminal justice system; reducing demand for illegal wildlife products; and supporting the development of sustainable alternative livelihoods.

* The official total of 1004 does not include the breakdown of Black to White Rhinos poached. Of the 448 animals poached in 2011, 19 were Black Rhinos.