A new collaborative report by TRAFFIC, FAO and the IUCN Species Survival Commission Medicinal Plant Specialist Group looks at why governments, the private sector and consumers need to care about precious yet often overlooked plant ingredients and how responsible sourcing can support broader wildlife conservation and marginalised livelihoods.

Wild plants are significant across socio-economic groups and geographic regions. A wander through the kitchen may reveal Brazil nuts in your cupboard, Gum Arabic in your soda and liquorice in your herbal tea. Your bathroom may have lotions or makeup containing candelilla wax or skincare products made with baobab or argan oil. Frankincense or Jatamansi may be found on the bedroom table as an ingredient in your perfume.

Behind seemingly minor ingredients lie complex supply chains and significant environmental and social risks. But there are also opportunities for sustainable management that could benefit the local ecosystem and communities that depend on these plants.”

Thousands of plant species used in everyday products are at risk primarily due to habitat loss and other factors such as climate change and over-exploitation. Of the 21 per cent of medicinal and aromatic plant species whose vulnerability status has been assessed, nine per cent are considered threatened with extinction. However, the people who depend on specific species for vital income are also often exposed to socio-economic, political and sometimes health risks too.

Sven Walter, Senior Forestry Officer at FAO adds; “The sustainable use of wild plants has critical implications for food security and for millions of livelihoods around the world. It is time that wild plants are given more serious consideration in our efforts to protect and restore habitats, promote sustainable agrifood systems and build inclusive, resilient and sustainable economies, particularly as countries work on post-Covid recovery.”

The report evaluates twelve flagship wild plant species, dubbed the ‘Wild Dozen’ assigning the species’ harvest social and biological ratings to highlight where improvements can be made. Of the twelve flagship wild-harvested ingredients reviewed, the majority of the risk assessment results (both biological and social) are Medium or High, with only one Low biological and one Low social result. This shows that these ingredients must be considered in due diligence, policies, and purchasing decisions. However, across the twelve ingredients, a range of engaging opportunities are noted including sustainable harvest, wildlife conservation and restoration, access and benefit sharing, research, partnerships, and engagement with best-practice standards and certification. The outlook for these flagships, and for wild ingredients as a whole, can be bright if appropriate actions such as those suggested throughout the report are taken by various stakeholders now.

The purpose of our social and biological risk ratings is not to dissuade businesses and consumers from using wild plant ingredients that can be harvested sustainably. On the contrary, it is to guide where steps can be taken to secure the long-term survival of wild-harvested species and availability of the sourced ingredients, improve marginalised livelihoods and enhance business ethics.”

With responsible sourcing, these ingredients can support broader wildlife conservation and improve the livelihoods of some of the 1 billion of the world's most vulnerable people who are thought to depend on them.

“Linking with this year’s Earth Day theme 'Invest In Our Planet', the report emphasises that it's time for businesses to invest in responsible sourcing of wild plant ingredients and the opportunities to support the conservation of iconic animals and the livelihoods that depend on these plants,” said Caitlin Schindler and similar to another TRAFFIC project doing just that; read about TRAFFIC’s Jatamansi project in Nepal.

“Other stakeholders have a role to play too. Governments and researchers must prioritise data collection and research on these important yet often invisible ingredients to secure an ongoing sustainable trade for plants and people.”

“It is an important year for the global biodiversity conservation effort, with governments, businesses and the public coming together around the ambitious Global Biodiversity Framework. Sustainable use of wild species, including wild plant resources in everyday products, is an important strategy to ensure the multiple benefits to nature and people. This ground-breaking report paves the way for the necessary change in the marketplace for these often ‘hidden’ resources. We call for ambitious commitments that businesses, investors, and governments can make through the #WeUseWild pledge,” said Anastasiya Timoshyna, TRAFFIC’s Senior Programme Coordinator – Sustainable Trade. 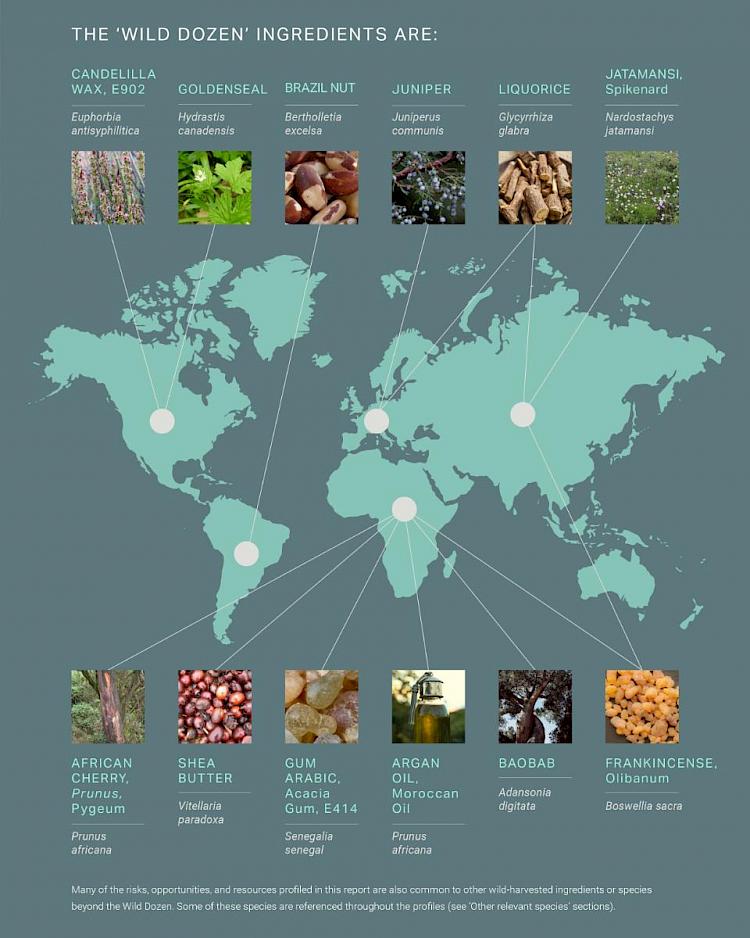 Following the report, businesses are urged to access the WildCheck Platform (coming soon from TRAFFIC) for risk assessments and responsible sourcing advice and to take action by signing the #WeUseWild Pledge.

are directly used by humans for food, fuel, timber, medicines, horticulture, and more

from tropical countries depend on nature for their occupation

We Use Wild Forum Report

About Food and Agriculture Organisation of the United Nations (FAO)

The Food and Agriculture Organization (FAO) is a specialised agency of the United Nations, supporting the transformation to more efficient, inclusive, resilient and sustainable agri-food systems. The conservation and sustainable use of wild plants and non-wood forest products is a key area of work in the FAO Forestry Division, with the aim of contributing to the sustainable management of the world’s forests, the conservation of biological diversity, and ultimately improving livelihoods, food security and nutrition.

With over 10,500 members in 174 countries, the Species Survival Commission (SSC) is the largest of the six expert commissions of IUCN and enables IUCN to influence, encourage and assist societies to conserve biodiversity by building knowledge on the status and threats to species, providing advice, developing policies and guidelines, facilitating conservation planning, and catalysing conservation action. Learn more at www.iucn.org/ssc

The Swedish Postcode Lottery believes that a strong civil society is essential for creating a better world. The Postcode Foundation’s goal is to carry out that mission through projects that challenge, inspire and promote change.