New Delhi, India: The collection and sale of seashells in India has expanded exponentially in recent years, leaving enforcement agencies behind on their capacity to monitor the trade. TRAFFIC and WWF-India have developed new identification (ID) tools to help authorities identify marine mollusc species accurately, in order to strengthen enforcement action against traffickers. 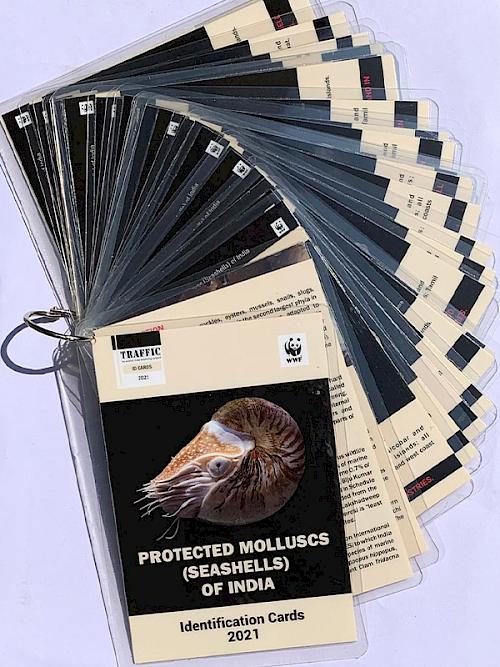 India’s seashell market is driven mainly by its demand for curios: for making accessories like buttons and combs, lampshades and fashion articles, and other decorative items. But TRAFFIC research into seashell seizures between 2009-2019 indicates a sizable amount of ongoing illicit trade, with the weight of reported seizures across the country during this period totalling more than 97,000 kg.

Discussions with enforcement agencies reveal that the challenges in curbing illegal seashell trade in India are mainly two-fold. Firstly, only a limited number of seashell species are protected under India’s Wildlife (Protection) Act, 1972. Just 24 of almost 3,400 species of marine molluscs (soft-bodied animals that remain enclosed in their shells) found in India are legally protected from exploitation and illegal trade.

The second challenge is related to correct identification of species encountered in the illegal wildlife trade. TRAFFIC’s ongoing analysis of seashell seizures for the period of 2009-2019 found that  almost a third of seized seashell species could not be correctly identified to the species level by first-level enforcement officers. This lack of identification can lead to wrongful seizures, faulty case reports and ultimately, low conviction rates in instances of illegal trade.

Dr Saket Badola, IFS, Head of TRAFFIC’s India Office and co-author of the ID tools said, “Seashells are sold openly not just at markets in coastal regions of India, but across the country. Correct identification of seized species is essential to better enforcement as it helps secure commensurate convictions through courts. We are hopeful that the new ID tools, probably one of their kind in India, will aid wildlife law enforcement officers in their initiatives to protect and conserve marine molluscs”.

Seashells in India are openly sold not just in markets in coastal regions but also across the country. Correct identification of seized species is the prerequisite for better enforcement as it helps secure commensurate conviction through courts. We are hopeful that the new ID tools, probably one of their kind in India, developed by TRAFFIC and WWF-India, along with the domain experts, will aid wildlife law enforcement officers in their initiatives to protect and conserve marine molluscs”.

Dr Deepak V Samuel, a well-known marine biologist and another co-author of the ID cards said, “Large quantities of shells are obtained as bycatch from bottom trawlers dragged along the seabed gathering whatever is in their path. As the number of trawlers has grown in recent years landing of shells has risen from what was witnessed 30 years ago. Most of the shells gathered end up in trade. Therefore, enhancing knowledge among the fishing community and enforcement agencies about sustainable practices, and about conservation of marine molluscs is crucial”.

In the form of ID cards and posters, the new ID tools will be made available to wildlife law enforcement agencies, including the forest department, police, border security forces, customs, DRI, and others. They can also be obtained by reaching out to TRAFFIC’s India Office at Enable JavaScript to view protected content..

India has a large market for seashells such as the Top Shell Trochidae and Turban Shell Turbinidae that are prized for their lustre and used to make buttons and other items. Window Pane Oysters Placuna placenta are used to manufacture lamps, articles for display, hair clips and other accessories, while larger shells like the Triton Charonia tritonis, Pineapple Shell Cassis conuta and the Helmet Shell Cypraecassis rufa are sold as souvenirs.

Meat of species like Horse Conch Pleuroploca trapezium is traditionally consumed by local fishermen and the processed dried flakes are sold in local markets. Other protected species, like the Windowpane Oyster are commercially exploited in several parts of the country. Powdered shells are apparently smuggled via sea to oil rigs in countries of West Asia and South America.