Festival of Lights casts shadow over owls in India

New Delhi, India, 2nd  November 2018—significant numbers of owls are being illegally trapped and sacrificed each year in India to supply tantric rituals and ceremonies marking annual Diwali celebrations. While the exact number of owls traded domestically is unknown, estimates place the figure in the thousands. 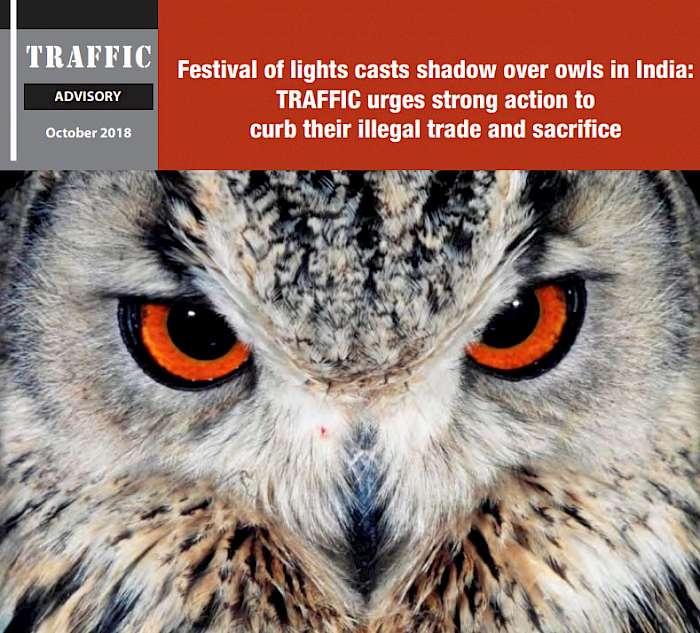 TRAFFIC has issued an Advisory to enforcement agencies calling for increased efforts to help curb the trafficking and sacrifice of owls that peaks around the annual Diwali "Festival of Lights" celebrations.

The document is based on TRAFFIC’s investigations into the illegal owl trade in India, published in Imperilled Custodians of the Night. The report found owls to be consumed and traded for a wide variety of purposes, including for black magic, street performances, taxidermy, private aviaries/zoos, food, use in folk medicines, capturing other birds, use of claws and feathers in making headgear, and eggs used in gambling.

Illegal trapping and trade peaks around the Diwali festival month, especially in Northern India. Occult practitioners drive consumer demand by touting the use of owl parts for purposes ranging from curing various illnesses to fighting the effects of evil spirits. Birds are poached for their bones, talons, skulls, feathers, meat and blood, which are then used in talismans, black magic, and traditional medicine.

Owls, especially with “ears” (or tufts) are thought to possess greatest magical powers, and Diwali is claimed to be the most auspicious time for making owl sacrifices.

Of the 30 species of owls found in India, 15 have been found in illegal wildlife trade with Spotted Owlet Athene brama, Barn Owl Tyto alba and Rock Eagle-owl Bubo bengalensis found to be the most commonly recorded species in trade.

TRAFFIC’s advisory is a strong reminder of the rampant trade and sacrifice of owls in India. We urge enforcement agencies to strengthen wildlife law enforcement efforts around owl habitats, forest areas, and bird trade markets.

Dr Saket Badola, IFS, Head of TRAFFIC's India office“As the practice of owl sacrificing begins with the start of the Dussehra festival, moving onto Diwali, poachers involved within the bird trade are most active during this season. This is one of the most important times for enforcement agencies to remain alert and increase their vigilance,” Dr Badola added.

Owls in India are protected under the Wildlife (Protection) Act of India that prohibits hunting, trade or any other form of utitlisation of the species or their body parts. Their international trade is further restricted under the Convention on International Trade in Endangered Species of Wild Fauna and Flora (CITES).

Owls play a vital role in ecosystems, not least through benefitting farmers by preying on small rodents and other crop pests, making their ongoing protection of high ecological, economic, and social importance.

Take a stand against the poaching of owls for black magic and support is shed light light on traffickers.