Authorities worldwide have seized tigers and parts equal to an average of 150 tigers a year over almost 23 years, with seizures in the first half of this year signalling the relentless pursuit of remaining tigers, a new TRAFFIC study revealed today.

Overall, whole tigers, dead and live, as well as a variety of tiger parts equal to a conservative estimate of 3,377 tigers were confiscated between January 2000 and June 2022 across 50 countries and territories, with data showing an increasing trend.

According to Skin and Bones: Tiger Trafficking Analysis from January 2000–June 2022, the tigers and their parts were seized in 2,205 incidents, mostly in the 13 Tiger Range Countries (TRCs).

India, home to more than half of the global wild tiger population, remains the top-ranked country with the most incidents and number of tigers confiscated.

The evidence clearly shows poaching and illegal trade are not temporary threats. Unless we want to watch wild tigers wiped out in our lifetime, immediate and time-bound actions must be a priority.”

Kanitha Krishnasamy, co-author of the report and Director for TRAFFIC in Southeast Asia

Data from the first half of 2022, the Year of the Tiger, stood out for several reasons: Indonesia, Thailand, and Russia recorded significant increases in the number of seizure incidents compared to the January-to-June period of the previous two decades.

This recent period was also particularly significant for Indonesia, home to the Critically Endangered Sumatran Tiger. It has already seized more tigers in the first half of 2022 (18 tigers) compared to all confiscations in 2021 (totalling 16 tigers).

It’s an ominous development for the Critically Endangered tiger and a cautionary tale for all tiger subspecies. There’s never been a greater urgency to intensify the fight against wildlife crime in all range states."

Efforts to safeguard tigers have been undermined by challenges over the years, including organised criminality from poaching and illegal trade and consumption. While increased survey coverage and improved on-the-ground protection in selected locations have shown a higher wild tiger population – 4,500 animals worldwide currently, compared to a previous count of 3,900 in 2016 – the increase does not apply across the range.

TRCs in Southeast Asia especially are struggling to protect their remaining wild tiger populations while also grappling with other trade problems, including captive facilities that supply the illegal trade.

Thailand and Viet Nam have featured most prominently, with 81% and 67% of seized tigers in the respective countries suspected or confirmed to involve captive-sourced tigers.

Viet Nam jumps out again for recording a 185% increase in the number of tigers confiscated in the 2018 –2021 period compared to the previous four years. With only a handful of wild tigers left, Viet Nam's seizures point to an illegal supply from overseas, captive facilities, or both.

Over the almost 23 years covered by the study, tiger skins remained the most frequently seized item, found in 902 incidents, followed by whole tigers (608 incidents) and tiger bones (411 incidents).

However, the frequency of whole tigers in seizures surged in the first six months of 2022 compared to recent years, found in 39% of seizures. Seizures of tiger teeth and claws also grew in prominence in recent years.  "The thousands of tiger parts seized are a testament to enforcement efforts, but they also speak to the continued threats tigers face. Poaching, trade and demand for tigers and their parts persist, compounded by the tiger farms which add to the illicit trade. Strong action is needed by governments to combat the pressure this puts on wild tiger populations," said Heather Sohl, Tiger Trade Leader at WWF’s Tigers Alive Initiative.

The report launched ahead of the CITES CoP 19, forms part of TRAFFIC’s priorities where the fate of tigers and other big cats will be a focus of discussions.

The authors of this report, aligned with TRAFFIC’s stand, have urged CITES Parties to fully implement CITES Resolution Conf. 12.5 (Rev. CoP18) on Asian big cats and the associated CoP Decisions, which recommend a slew of actions covering improved legislation, enforcement, record keeping and actions to prevent tiger parts and
derivatives from captive breeding facilities from entering the illegal trade chain. 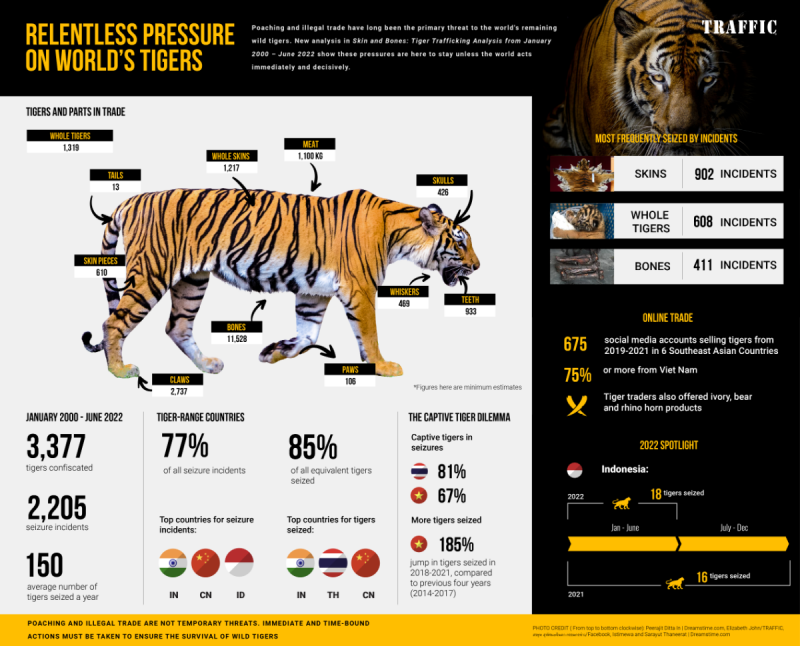 between January 2000 and June 2022 across 50 countries and territories, with data showing an increasing trend.

were the most frequently seized item, found in 902 incidents over almost 23 years

in the first six months of 2022 compared to recent years - an increase in 39% of seizures.

TRAFFIC’s data work in Southeast Asia, which made this work possible, is funded by TRAFFIC’s zoo partners of the Zoo and Aquarium Association Australasia (ZAA)

Hard to Bear: trade in bear bile and gall bladder in Malaysia