Ministry of Health joins efforts to save rhinos: Call to cease use of rhino horn for medical purposes 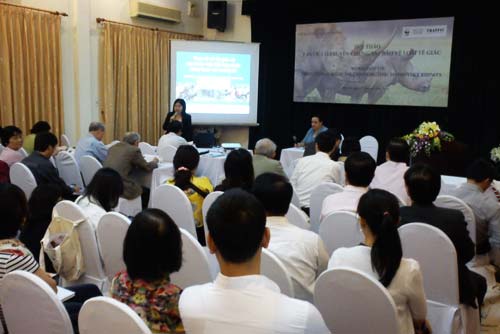 The first of two workshops was held in Ha Noi on May 7th and the second will take place in Ho Chi Minh City on May 16th. In total, over one hundred participants, including traditional medicine practitioners, academics and MoH representatives, will be involved in discussions on ways to share the message to say No to rhino horn consumption.

At the workshops the participants received information and discussed a number of topics including the reality of illegal trade, particularly referring to the current rhino poaching crisis, the historical use of rhino horn in traditional medicine, effective alternatives and the current laws covering rhino horn in Viet Nam.

Dr Naomi Doak, Coordinator of TRAFFIC’s Greater Mekong Programme, presented to the May 7th workshop on details of the current rhino poaching crisis. According to South Africa’s Department of Environmental Affairs, a devastating total of 1004 rhinos were killed in 2013 and as of April 11th 2014 277 have already been killed in South Africa. Consumption in Asian countries, including Viet Nam and China, has been identified as one of the main reasons for the escalating poaching numbers and the current crisis facing these animals.

The workshop on the 7th, and the coming one on the 16th, provided the opportunity for Dr Doak to present a summary of recent consumer research commissioned as part of the WWF/TRAFFIC Global Campaign on Illegal Wildlife Trade, to identify the main consumer groups of this illegal product and the motivations behind the purchasing decision and consumption. The research highlighted belief in the medical properties of rhino horn as one of the underlying motivations for buying and using this illegal product.

Professor Dr Hoang Bao Chau, former director of the National Institute of Traditional Medicine, made a presentation during the May 7th workshop, which supported the one prepared by Professor Dr Nguyen Chan Hung, President of the Cancer Association of Viet Nam, emphasizing that rhino horn cannot cure cancer.

During the afternoon discussion at the Ha Noi workshop, the participants agreed to the drafting of a recommendation by the Traditional Medicine Administration to be submitted to the MoH, before sending to all provinces and Traditional Medicine Associations, with the message to say No to the use of rhino horn and other endangered species; in an effort to assist in their conservation.

There was also unanimous acknowledgement that there is no evidence to support the myth that rhino horn can cure cancer. Next steps include a discussion to identify the best way to communicate this message to people consuming rhino horn for medical purposes.

“TRAFFIC is working closely with the Ministry of Health to develop the recommendation. We are extremely pleased to see the commitment of the Ministry towards the fight to save rhinos and the strong steps being taken to ensure existing regulations and commitments are adhered to” said Dr Naomi Doak. “We are at a turning point for these animals and without working together we could well face a world without them”, she added.

According to Professor Dr Hoang Bao Chau, “Currently rhinos are facing extinction due to poaching and this species is listed in the Red Book and protected by law. So while rhino horn is mentioned in some remedies in Traditional Medicine publications from the perspective of traditional medicine I think we should take actions to say No to rhino horn by using alternatives and raising awareness among the public.”

In the workshop conclusion on May 7th, Dr Nguyen Hoang Son, Deputy Director of Traditional Medicine Administration, emphasized that, “Traditional Medicine Administration will closely collaborate with relevant authorities to conduct research to find solutions to enhance the protection of rhinos, which contributes to preserving biodiversity in the world.”

The workshops are providing a forum of discussion so practitioners and experts can agree upon a commitment to eliminate the use of products originating from rhino horn from widely accepted and referenced text books and publications. All commitments and actions saying No to rhino horn from traditional medicine practitioners play a role in the efforts to protect rhinos.