Rhinoceros species are found in the wild in Africa and Asia and continue to be threatened across their range primarily due to the illegal trade in rhino horn. Rhino horn products are sought to demonstrate status, and as a perceived treatment for illness and to promote wellness. Despite national and international trade bans, including a CITES Appendix I listing since 1975, the illegal killing of rhinos to supply the illicit trade of horns escalated after 2007 leading to a decline in rhino populations across continental Africa.

The latest IUCN/TRAFFIC report on African and Asian Rhinoceroses – Status, Conservation and Trade (CoP19 Doc. 75) documented that overall continental poaching rates in Africa have declined since 2018 and fewer rhino horns entered illegal markets annually between 2018-2020. However, since 2020 represented an abnormal year with potentially low levels of illegal activity, law enforcement and reporting due to the COVID-19 pandemic, it is not possible to determine whether the observed declines are sustainable as economies recover post-pandemic.

A combination of increased law enforcement collaboration between countries most impacted by the illegal trade (e.g. between Mozambique and Viet Nam; China and South Africa) and stricter wildlife laws in consumer countries (e.g. Viet Nam’s updated wildlife law effective in 2018), could have contributed to reduced poaching and trade observed in rhino range countries but the exact impact is uncertain. In addition, recent demand reduction strategies have gained traction in consumer markets, yet long-term impacts remain to be seen.

Considering the uncertainty of drivers of the observed reduction in levels of illegal trade, continued cooperation of law enforcement efforts between affected range and consumer countries in Africa and Asia is required. This is especially the case with the regular exchange of seizure information, including DNA sampling of seized horns, which can help inform whether regular illegal trading routes exist and where are horns sourced from. The latter is important given that stockpile reporting by the Parties is poor where destruction events are not reported, and stocks do not measure up to expected weights based on reported seizures.

In line with similar proposals for elephants at CoP19 (CoP Doc. 66.2.1), better reporting practices of rhino specimen stocks are warranted with Parties reporting detailed itemised inventories rather than aggregated summaries. Similarly, comprehensive monitoring of rhino poaching and the illegal trade in rhino specimens in parallel with an improved understanding of the post-pandemic end-markets is critical.

At the 74th meeting of the Standing Committee in March 2022, the CITES Secretariat encouraged Parties to make use of standardised procedures, including a specific form for the collection and sharing of data on rhinoceros horn seizures and on samples for forensic analysis to trace rhino horn sources. These are currently being underutilised but are a good resource to facilitate the exchange of information and more frequent and effective sharing of samples for forensic analyses in support of investigations. Current mechanisms to facilitate such collaboration, e.g. the Memorandum of Understanding between South Africa and Viet Nam amongst others, have resulted in a number of large seizures and arrests. However, with greater focus and accountability, they do have the ability to be more effective and contribute towards successful prosecutions and high-profile convictions. Fora such as the CITES Rhinoceros Enforcement Task Force have great potential in enhancing such joint efforts and facilitating the building of trust between countries.

To accurately monitor and reflect on rhino horn poaching and trade dynamics post-pandemic, greater sharing of critical information such as DNA samples among countries most affected by the illegal trade is needed. Countries are encouraged to improve the number, as well as the capacity, of registered forensic laboratories to process samples of horns seized in trade, which can provide insights into the illegal supply chains and inform both law enforcement and demand reduction initiatives. Building upon the RHODIS© database and expanding shared regional rhino databases can aid cross-border collaboration in this regard and improve the response time of investigations. The use of registered forensic laboratories allows for standardisation across countries, thus ensuring that evidence collection and management meets international judicial requirements for admissibility in court, thereby supporting effective prosecutions.

To further support investigations and safeguard evidence for forensic analysis and prosecutions, a robust stockpile management system is essential. Through Resolution Conf. 9.14 (Rev. CoP17), CITES urges countries to submit information annually on stockpiles and destruction events. However, currently, rhino horn stocks are not being reported on consistently or in a standardised manner. Transparent sharing of a more detailed, itemised inventory of rhino horn stocks is needed to be most effective in both monitoring the illegal trade in horns, and in investigations determining the source of horns and the relevant trade routes. TRAFFIC has provided detailed guidance on developing a robust stockpile management system with the overall aim of preventing government-held stockpiles of valuable trade commodities from leaking back into illegal trade. Good inter-governmental communication and clearly mandated, centralised control over the management of stockpile data are integral to an effective management system. Again, fora such as the CITES Rhinoceros Enforcement Task Force have the potential to enhance inter-governmental communication and encourage the sharing of data.

Key to ensuring that current and future monitoring, law enforcement and behaviour change initiatives remain relevant post-pandemic, consumer studies and market research is needed to fully track changes in both consumptive and non-consumptive uses and demand for rhino, rhino horn and rhino horn products. The CITES Resolution Conf. 17.4 on ‘Demand reduction strategies to combat illegal trade in CITES-listed species’ recognises that while enforcement interventions are critical in addressing illegal wildlife trade in all species, a complementary effort to address the persistent market demand that drives the trade is needed. The resolution encourages regular, in-depth research to understand the drivers and dynamics of demand; and to actively develop and implement well-targeted, species-specific, evidence-based campaigns by engaging key consumer groups and targeting the motivations for the demand, including the speculative nature of the demand.

news and reports related to rhinoceros

TRAFFIC publications related to the trade in rhinoceros. 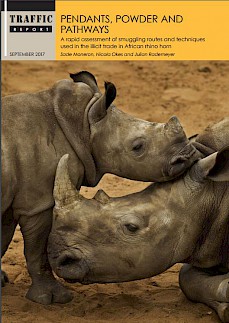 Pendants, Powder and Pathways: smuggling routes and techniques in the illicit trade in African rhino horn 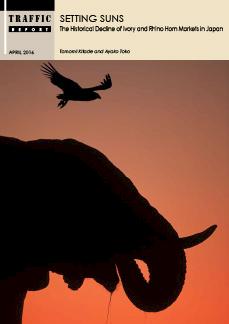 Setting Suns: the Historical Decline of Ivory and Rhino Horn Markets in Japan 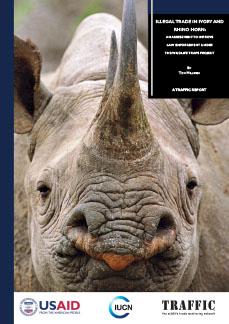 Illegal trade in ivory and rhino horn: an assessment to improve law enforcement